On the Saturday, after the talks and buffet lunch at St Peters, followed by the visit to the Margate lifeboat for those who wanted to or, as in the case of the Ohio attendees, a tour of the places connected with their ancestors who emigrated from Thanet to the USA in 1835, we had time to return to the hotel to relax and prepare for dinner.

The Orangery is a restaurant attached to another hotel high on the cliffs overlooking public gardens and the sea – ideal if people wanted to get some fresh air and take a stroll before dinner to build up an appetite. 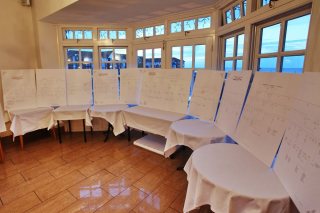 As people arrived I asked them to stay in the lounge whilst I set up the family trees so that anybody who wanted to have another look could do so as it would be the last opportunity they would have. 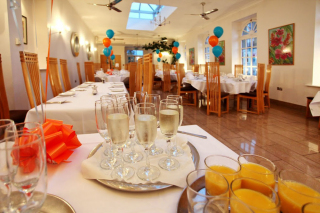 The balloons and ribbons décor and the place cards followed the colour theme set by the name badges and table napkins in the morning.

As they entered, everybody was offered the choice of alcoholic or non alcoholic fizz or orange juice. As I explained later, the drinks had been paid for by David and Jo Emptage. Although they had to cancel their plans to come because of David’s illness, they still wanted to provide the drinks to ensure a good start to the evening. Their kind gesture was much appreciated. 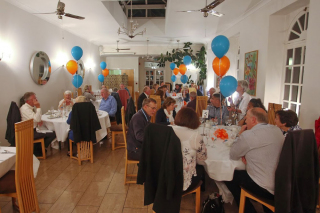 Each table had a nominated host, a member of Team Emptage, whose role was to lead conversation if there was a lull in proceedings. Well, I don’t think there ever was such a lull except when people were eating. Every time I looked around, people seemed to be talking quite animatedly. Being a nosey person, an important character trait for a family historian, I would have liked to listen in on the conversations.

There were 33 of us, spread over five tables. I had spent a long time working out the table plan and had arranged for partners to be sat with each other but for other members of the same family to be dispersed amongst the tables so they could meet new people. 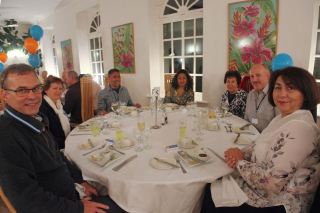 Although the Barbadian branch had, over the years, dropped the p from Emptage, it’s interesting to note that many of the entries in the parish registers in London in the 1700s also spelt the name as Emtage. 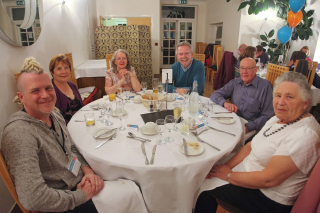 I had claimed organiser’s perk by choosing to have my uncle Colin and his sister in-law Sylvia at the same table as my brother and myself. Before the Gathering, I had last met Colin when I was nowt but a toddler and I’d not met Sylvia since she came to London on honeymoon following her marriage to Tony Emptage, in 1958! From left to right: Tad, Lynn, Susan, JJ, Colin, Sylvia.

It was incredible to be sat there with them, something which, in my wildest dreams, I never could have imagined. As was the fact that two of Sylvia’s sons and her daughter in-law were also at the Gathering. My cousins who I’d never met. 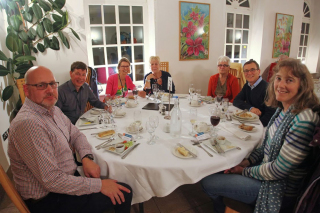 There seemed to be considerable amount of hilarity enjoyed by one table as gales of laughter could regularly be heard. Tim Emptage, our military researcher who would be happy to take up permanent residence at The National Archives in Kew, and Pat Johnson, our chief conundrum solver who is also to be found happily digging around in the Margate cemetery records, were jointly hosting that table and evidently they were keeping things flowing. From left to right: John, Tim, Alida, Pat, Tessa, Tron, Jenny. 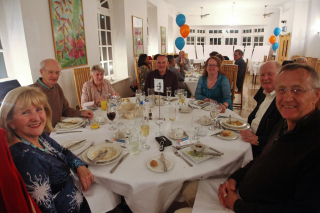 Roger Emptage, the only representative of the Isle of Sheppey Emptages present, hosted table 4. He was the first team member to take a DNA test. Hopefully we’ll have more descendants of the Isle of Sheppey and Grimsby Emptages at the next Gathering. At the same table was Ray Emptage, our newest team member, who has definitely inherited the Emptage mariner genes and will be researching their lives as mariners. From left to right: Andrea, Roger, Judy, Philip, Denise, Ron, Ray. 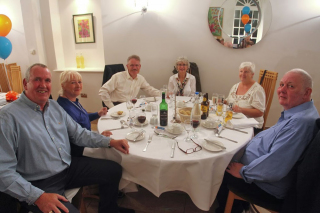 Mark Emptage, our DNA Study co-ordinator and interpreter of results, hosted a table. At the same table was Andrew Emptage, who somehow managed to eat his meal in between moving around the room to take the photos. I wonder who took that photo, with him in it? From left to right: Andrew, Yolanda, Mark, Becky, Susan, Keith.

Mark and Andrew had each, quite independently and several years apart, developed the theory that our name stems from the Anglo-Saxon words “æmettig, æmetig or æmtig”

We had planned a surprise announcement for the end of the evening. And, as it was Tim’s idea and he had flown halfway around the world to get David’s approval of it in 2016 before presenting me with a fait accompli, I made sure that he was the one to get up and confess – or rather, make the announcement.

I made it very clear that I flatly refused to even think about it until January as we needed time to catch up after the time spent on the Gathering preparations.

As the evening drew to a close, I again mentioned the drinks provided by David and Jo and our regret that they couldn’t be with us. Jenny Sanderson suggested that we get some paper so that we could write messages to him. It was a lovely idea and everybody did so. A few days later I scanned the pages and emailed them to David, who was very touched that people had thought of him like that.

In the photos below:

The Ohio contingent: Tad, Tron, Ron, Becky and Mark.
The Barbadian contingent: Doris, Michele, Alan, Karen and Andrew.
The Yorkshire contingent: Denise, Sylvia, Philip, John and me – whatever was I gesticulating about?
Sylvia, Denise, Philip and John.

And so ended the first day of the first Emptage Gathering.

All the photographs on this page were taken by Andrew Emptage.

Next: Gathering at St Nicholas at Wade