You are here: Home / New Zealand / The Origin of the Emtage family in New Zealand

The spelling of the surname indicates that the Emtages of New Zealand had their origins in Barbados where several of the branches of the Emptage family dropped the ‘p’ from their name. But who was the first Emtage to arrive in New Zealand and set up home? And when did he do so?

George Samuel Emtage was the eldest son of John Dixon Emtage and Margaret Jane Archer, the eldest of ten children. He was born on 29th May 1859, in Bridgetown, Barbados where his father and brother ran a sugar plantation.

George Samuel was the great great grandson of John Emptage who, through his marriage to Elizabeth Stafford in 1764, began the Emptage/Emtage family in Barbados.

This is George’s story as recounted by his youngest son Albert and wife Enid for inclusion in a book about his home town in Warkworth and the Mahurangi River located 40 miles north of Auckland, New Zealand.


George, like many of his forebears and descendants, had a passion for the sea and pleaded to be allowed to join a ship. His father enlisted the help of a friend who captained a ship to take the boy on a voyage and to make it difficult for him. And so, at the age of nine, he became a Cabin Boy. At night he was required to leave a bucket of water near the Captain’s bunk. A shouted order would awaken him and, if he did not give an immediate response, the water was thrown over the small boy. Perhaps it’s not surprising that, on arriving in London, he was hospitalised with pneumonia. Fortunately he recovered and returned home. 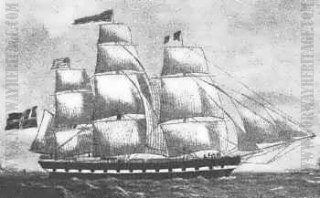 His parents tried to have him remain ashore but, at the age of twelve, George went to school one day and did not return home. He had enlisted on a ship, probably the Golden Fleece. After serving on various ships, he arrived in Auckland, New Zealand via Cape Horn in about 1874.

There, George and a friend jumped ship and walked as far as they were able before nightfall and slept that night on a riverbank. When he awoke he found that he was alone and that all of his possessions were gone too! So, at fourteen, with just the clothes on his back, he set out to make a new life in a new country, far away from home and family. Having been fired from an attempt at being a farm hand, George went back to sea. He soon found himself a hand on the ship of Captain Joseph Higginson Ragg of Warkworth.

John Anderson Brown founded Warkworth in 1854, naming the new town after his home town Warkworth, Northumberland, U.K. He built a sawmill to provide timber for the new town of Auckland and later a flour mill.

Warkworth became a busy port area for the Wilson’s Cement Works, Morrison’s Orchards, farm produce and a large boat building industry by people who re-settled from Nova Scotia, Canada due to its challenging climate.

An Englishman, John Porter Chandler had worked as a lumberman in North America and his skills in extracting lumber and building driving dams got him the job of manager of Brown’s Mill. His American wife, Charlotte Belinda Louisa Chandler, became housekeeper to Brown. From Warkworth the Chandlers moved to Waikato where John Chandler became a millwright. By 1880 they were back in Mahurangi, on Motuora Island.

George was fifteen when the cutter he was working on called at an island called Motuora in the Hauraki Gulf. The island had been inhabited since the first arrival of the Maori. The meaning of the name is ‘the island of well-being’. It is an 80 hectare island between the northern entrance to the Mahurangi Harbour and the southern entrance to Kawau Island, north of Auckland.

By 1880 the Chandlers were the owners of the island, having bought it from the former Governor of New Zealand, Sir George Grey. It was renamed Chandler’s Island.

The Chandlers became very fond of George, who was often aboard a ship which stopped at the Island and, as they had no children of their own, wanted to adopt him. George, who was 21 in 1880 and very independent, declined but remained a friend and visited them as often as possible.

In 1883 George married Maude Ann Ragg at Mahurangi, the eldest daughter of Captain Joseph Higginson Ragg of Warkworth, on whose ship he was working. Maude had four sisters and one brother. The family had a farm “Little Scotland” at Pohuehue, but later shifted to a farm a mile down river from Warkworth (Kirks).

Joseph Higginson Ragg and his wife Elizabeth ran a bakery, a boarding house and lime works in Warkworth. In the 1890s the boarding house became “Ragg’s Temperance Hotel.” 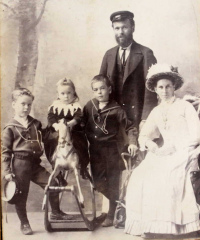 George and Maud Emtage
and family

After marriage, George found a job ashore. He became gardener and boatman to Hugh Lushington, who kept a large two masted yacht Muritai with a paid crew. George and Maude lived in a cottage at Dairy Bay. Their children William (1884) Joseph (1887) and Rose (1890) were born in Warkworth in the Ragg home.

John Chandler was becoming frail and realised that he would not outlive his wife. He made an arrangement with his young friends that if they would take care of them until they died, then they would inherit Motuora Island. This arrangement was honoured on both sides.

And so George and Maude moved to Motuora Island in 1892. The house was a shed which they nicknamed “Cobwebb Hall”. Captain George supplied firewood to the mainland, ran some sheep, and did commercial fishing. Maude gave birth to Margaret (1894) and George jnr (1896) in Warkworth. Two more children, Mabel (1899) and John (1902) were born on the Island with a midwife in attendance.

Many of the Auckland keel yachts made the trip and put the event on the Auckland yachtsmen’s calendar. The Mahurangi Regatta continues to flourish today on Auckland’s Anniversary weekend.

In 1901 George entered his little clinker fishing smack Lily, but after the regatta George caught the bug for ‘proper’ yacht racing. During the winter of 1901, he commissioned a new 24 foot fishing mullet boat from Bailey and Lowe, the top builders of that time which he named Spray and it was launched in September. George became a top skipper and was very competitive. In 1905 George sold Spray to Albert Sandford jnr of the famous Sandford Seafood and fishing company.

In 1905 the family moved to Warkworth to a new house built by the Captain, taking Mrs Chandler with them. Mrs Chandler died in 1906 and George inherited the Island. George and Maud had sons Charles in 1905 and Albert in 1910. 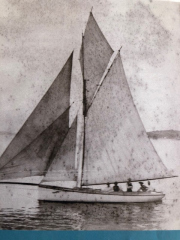 George’s attempt to sell the Island was unsuccesful but two local businessmen, the Collins Brothers, rented the island and a 24 foot yacht Manola to service the farm in 1912. It was a mullet boat or “smack” but as an out and out racing yacht it earned big prize money being offered at various Auckland Regattas.

In 1910 George was back at sea in command of Wilson Cement & Co’s cutter Will Watch which ran between the works at the head of the Mahurangi River at Warkworth and Whangarei with cement on the way up and Kamo coal on the return.

It was announced when he resigned from Will Watch in July 1912 that he intended to devote his attention to his Island. He bought Manola from the Collins brothers and used her to carry farm produce to Warkworth. His younger son George jnr worked with him on the farm. There was no harbour and the beach landing was not reached easily by boat. They ran 200 sheep, stock and milked cows. The cream was taken first by dinghy to the yacht and then to the dairy on the mainland. It was a difficult job in bad weather.

George used to do a lot of fishing and smoked part of the catch. He used Manola as the link to the mainland for the weekly family outing and for supplies. George would sell fish, fresh and smoked, fruit, vegetables and fowl grit. Besides fishing, George maintained and repaired boats, kept an excellent garden, grew his own tobacco and taught his dog tricks. Maude grew 17,000 onion plants in a season and the orchard contained peaches, pears, apricots, figs, passion fruit, persimmons, guavas, and grapes. 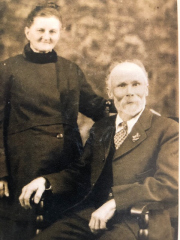 By the time the Captain had retired from the sea, he had served on 39 ships, got his master’s certificate on the 14th ship, and served as Master on nine coasters and Mate on two steamers. The old Captain was a careful mariner and never had an accident in all his years as Master. He did not own the ships, but took pride in them all.

One of his last commands Will Watch was kept like a yacht in spite of running coal and cement to Whangarei. It served as flagship in the Mahurangi Regatta. On the Island, he continued to ring the watches on a ship’s bell hanging on the veranda.

Some of the New Zealand Governors General used to visit Motuora Island for the hunting during the times of the Chandlers and the Emtages. Sir George Grey would host shooting trips for Lords Liverpool and Jellicoe, Sir Charles Fergusson, Lords Bledisloe and Galway. Lord Bledisloe visited when George and Maude were in residence and sent George a set of pipes and tobacco from England as a thank you gift.

George tended the graves of John and Charlotte Chandler at Te Muri until he died.

George passed away in 1937 aged 78, six week after Albert and Enid’s wedding. After the funeral service, held at the water’s edge, his coffin was carried to the boat by his six sons in navy blue suits, barefooted, and trousers rolled up to the knees.

Captain George Emtage made the last of his many trips up the Mahurangi River to Warkworth. He is buried in the Warkworth Anglican Cemetery. George was well respected in Warkworth for his hard work, many talents, marine skills, care of his family, the Chandlers and his community spirit.

Maude Ann Ragg was born Auckland in 1865. She married George Samuel Emtage in 1883 in Warkworth. They were married for 44 years and had six sons and three daughters. Maude died in 1945 aged 79, in Warkworth.

George jnr and his wife Katheleen farmed the island until 1942 before settling on a farm in Massey.
The farm was leased before the island was sold in 1946. It was purchased by the Crown in 1966 and is now part of the Hauraki Gulf Marine Park and is used for recreation.

She writes:
“I did not know my great grandfather George, as he died a month after I was born. However I did know my great grandmother Maude, as she came to live with her daughter Rose, my grandmother, on the Langridge family dairy farm near Warkworth. She moved in with Grandma Rose in 1940 when I was three and died when I was eight. She was very tiny, not 5ft tall with grey hair, pulled into a bun, wore grey dresses, and sat in an armchair with a little grey Sydney Silky Terrier called ‘Tiddles’ on her knees. I called her “little Grandma” to distinguish her from Grandma Rose. Rose became “big Grandma” all 5ft 4 inches of her! I don’t think that she was very pleased with her nickname. Little Grandma lived out her life well cared for and loved by her very large family.

The Emtage family of New Zealand continues the marine passion in its younger members. All of George’s sons had boats and Albert had a mullet boat also named Manola. Grandsons of George have been boat builders, sail makers and yachtsmen. Two grandsons became well known 18 foot sailors, winning the Sanders Cup in Auckland, so the tradition continues as New Zealand is well known in yachting circles worldwide for its success in America’s Cup competitions.”

The ancestry of George Samuel Emtage