We are an island nation and many of us, whether we lived near the sea or not, can remember the Penlee lifeboat disaster in 1981 when the RNLI lifeboat went to the aid of those on board a ship after its engines failed in heavy seas. Winds were gusting up to 90 knots (100 mph) and waves were up to 60 feet high. Such were the conditions that the rescue helicopter was unable to winch anyone off the ship.

After making several attempts, the lifeboat drew alongside the ship and radioed that they’d got four people off but then nothing more was heard from either the ship or the lifeboat. All of those on board both vessels were lost off the coast of Cornwall. The lifeboat had turned over in the heavy seas and it was that disaster that drove the need for self righting lifeboats.

For hundreds of years, local mariners and fishermen around the coast used their boats not only to fish or run pleasure trips but also to supplement their income, especially in the winter months, through the salvage of stricken vessels. Whilst there was financial gain through the salvage, we cannot underestimate the extreme bravery which the mariners exhibited in putting to sea in atrocious conditions to rescue the crews of the sailing ships driven on to the rocks. It was hazardous and several local men lost their lives over the years, including some Emptages.

Nearly two hundred years before the Penlee disaster, in 1897, the Margate surfboat Friend to all Nations capsized with the loss of nine crew members. Forty years earlier, in 1857, the lugger Victory was lost when it was swamped by heavy sea and disappeared beneath the waves with the loss of nine sailors and fishermen from Margate, including two Emptages.

We have featured several of the stories of the Margate Emptage mariners on the website, including:

These days lifeboats, still crewed by volunteers, are under the auspices of the Royal National Lifeboat Institution. Having been founded in 1824 as the National Institution for the Preservation of Life from Shipwreck, it became the RNLI when it was granted a Royal Charter in 1860.

In recognition of our heritage, we arranged a group visit to the RNLI’s current lifeboat at Margate on the Saturday afternoon of the Gathering. The Emptages had continued to be involved in the lifeboat service and I had been in touch with Nick Smith, the archivist for the Margate Lifeboat and explained that we were interested in what the records might show of the Emptages. 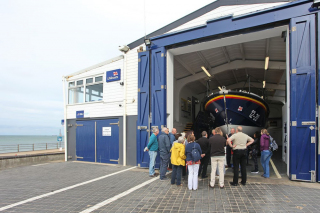 We were met at the entrance to the lifeboat house by Nick, his colleague, Paul Hodson, the Lifeboat Operations Manager (who I’d originally spoken with when I booked the visit) and the local treasurer (whose name I forgot to note) joined us. 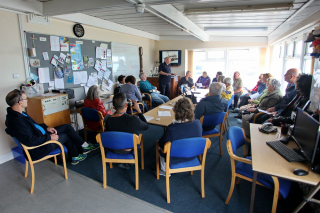 Having been instructed in what to do in the event of the lifeboat being called out on an emergency, we assembled in the crew room of the lifeboat house, from which there is a broad view of the sea, with the Isle of Sheppey in the distance. The sun was shining and the sea was calm and, though I have seen pictures of the damage caused by storms over the years, on land as well as to ships, it was hard to imagine the conditions in which our ancestors had to work, in rather more flimsy boats than the current lifeboats. 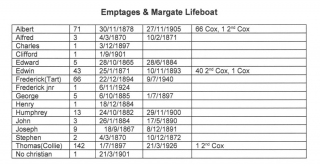 Nick had been through the records and extracted the various references to the Emptage crew members over the years and compiled a table showing their first names, the dates that they served, and the number of trips out they had made, called shouts.

[In combing through the archives, Nick had been assisted by Chris Sandwell, who unfortunately couldn’t be present. Chris is a descendant of the Sandwell family, another long standing mariner family of Margate, members of which often crewed the lifeboat s with the Emptages.] 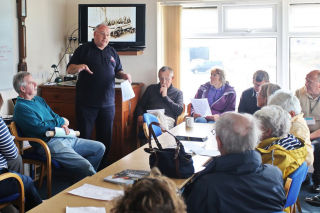 Nick also displayed some photos from the archives. He gave each person a copy of the table, notes about the photos and a list of those who had given notable service.

In an article on the Margate Lifeboat men I have tried to identify those on the list and have reproduced the photos and notes there, by kind permission of the Margate RNLI. You’ll find the article here. 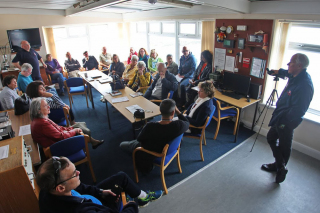 Paul Hodson explained that the lifeboat house is now not in the best position for the current Mersey class lifeboat, which has to be pushed out of the lifeboat house by a tractor and then taken along the road to where it can be launched from the beach. Not only is it unsatisfactory because it takes precious time but the Mersey class is near the end of its life. It needs to be replaced by the 50% faster state-of-the-art Shannon class lifeboat.

However, the Shannon will need a larger lifeboat house to accommodate it and the RNLI is negotiating to build a new lifeboat house in a situation which will give it direct access to the beach. Initial plans were found to be controversial but negotiations continue. Margate RNLI wants to continue to provide the best possible service to keep Thanet’s waters safe for locals and visitors alike.

In February 2017, the volunteer crew and local supporters were given a chance to see a new Shannon in action at Margate. It was in the area and called at Margate for a day to carry out launch and recovery trials and allow the station’s volunteer crew to experience it afloat.

Following the session in the crew room, we were divided into two groups, one group went to see the main lifeboat whilst the other went to see the inshore lifeboat. And then we changed over.

I don’t know what I expected from our visit to Margate RNLI and the lifeboat but I do know that Paul and Nick gave us much more than any of us had envisaged. They did us proud and gave us even more pride in our mariner ancestors. We are most grateful for their time and attention.

The Margate branch is fundraising and would be very grateful for any donations towards the costs the new lifeboat house. Cheques should be made payable to Margate RNLI and sent to The Treasurer, Margate Lifeboat Station, The Rendezvous, Margate, Kent, CT9 1HG.

All of the photos on this article were taken by Team Emptage member Andrew Emptage. Click on the images to see them in full size.

Next: Gathering at The Orangery