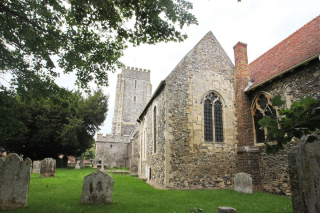 One of the four Emptage/Emtage family trees is headed by Henry Emptage and Ann Peal. They were both baptised in St Nicholas at Wade in 1737 (with their details on the same page of the parish register) and married there in 1763.

Of the twenty four direct descendants of the Emptages present at the Gathering, ten are descended from Henry and Ann, four of whom had flown in from the USA for the event. And so, high on our wish list was a visit to the church at St Nicholas at Wade. 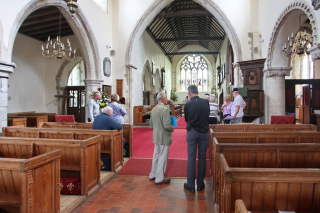 I had checked with the vicar that the church would be open after the service on the Sunday.
Some of us attended the service, others arrived soon after.

Some parishioners were there to talk with us and Lynn Hempsall was delighted to meet with a friend she was at school with, in Yorkshire! 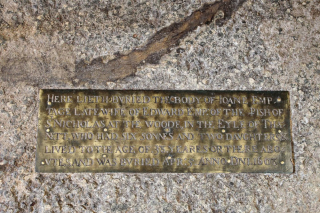 The grave stones in the church yard are too weathered to be able to see if any were for the Emptages so of much interest were the five Emptage memorial or ledger stones let into the floor inside the church. It’s the second time I’ve visited the church and it still seems disrespectful to walk across the stones. 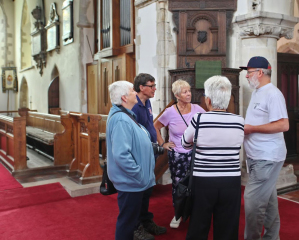 Also of interest is the plaque above the pulpit, dated 1615, carrying the initials IS and EE.

I was asked to write an article for the parish magazine and began with the plaque. The article is reproduced below, complete with the illustrations (though they were in black and white in the magazine).

Unfortunately, the final paragraph was accidentally omitted from the published version and so I shall write it here.

Visiting the church where many of our ancestors worshipped, were baptised, married or buried some 255 to 400 years ago, was quite an awe-inspiring experience made complete by the delightfully warm welcome from its parishioners. 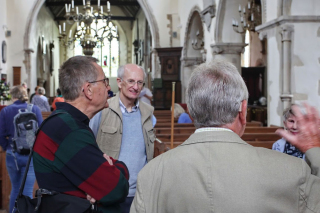 The church is less ornate than St Peters but still takes an enormous amount of money in upkeep and there are regular fund raising events.

All the photos illustrating this article were taken by Team Emptage member, Andrew Emptage.

To read more about the Emptages at St Nicholas at Wade, see here.

The Emptages Gather at St Nicholas at Wade 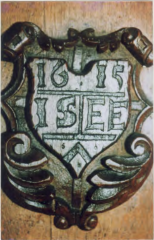 Above the pulpit in the church is a small plaque, with the date 1615 and the initials IS and EE. Have you ever wondered to whom those initials refer?

In Latin, there is no J and so I also stood for a J. The initials are those of churchwardens, Joel Solly and Edward Emptage.

The Emptage family were well established in Thanet but who was Edward and how did he come to be in St Nicholas?

His father, Richard Emptage, a farmer in St Peters, married Joan Allyne in 1565 in St John the Baptist Church in Margate. Sadly, Joan was widowed very early in the marriage and was left with three small children, including Edward, and another on the way.

In 1571 she married John Sackett, a reasonably prosperous yeoman in St Nicholas at Wade and a member of another well established Thanet family. And so Joan and her Emptage children arrived in the parish.

John Sackett died in 1588. He left the lease of his farm to his wife during her widowhood, with the stipulation that if she married again, it would revert to her son Edward, on payment by him of £100 to his mother.

Joan married a third time, to Richard Knowler of Hoath. Her death in 1603 was recorded on a memorial or ledger stone in the church:

Here lyeth buryed the body of Jhone Knowler, late wife of John Saket and Richard Emtage. By the foresayed Richard Emtage she had issue two sons and two daughters, the which said Jone deceased the 6 of January Ano Dni 1603.”

The stone is a prime example of the difficulties we face when searching for our ancestors in the days before standardised spelling.

Edward Emptage married Joan Terry, daughter of John Terry of Herne, in St Martin’s, Herne, in 1591. Having taken over the Sackett farm on his mother’s remarriage, he and Joan stayed in the parish and, according to Joan’s memorial stone, had eight children. He was a yeoman of substantial means and a church warden.

Joan died in 1608 and two years later Edward married Ann Sims at St Brides, Fleet Street, London. They had no children and Ann died in 1622.

Here lieth buried the body of Anne late the wife to Edward Emptage of the parish of St Nicholas at Wade who in her life was towards God religious, to her husband loving and comfortable; over all his children (having no issue of her owne body) tender & careful who livinge unto the age of 51 years, made a godly end the 27th of January, Anno Dni 1622.”

There are three more memorial stones: Edward’s first wife, Joan, who died in 1608, aged 38, having had six sons and two daughters, and their sons Richard and Ralph who were both married and died in their 20s, Richard in 1617 and Ralph in 1631.

Family historians are reliant on parish registers but unfortunately, several of the registers for the years between 1596 and 1630 in St Nicholas at Wade did not survive. Nor did any records kept during the years of the Civil War and Commonwealth, 1642-1660. And so there is a 100 year gap between the last Emptage recorded baptisms 1637 and 1639 and the name Emptage appearing again in 1737, when Henry, the son of John, was baptised. On the same page in the register was the baptism of Ann Peel. Henry and Ann married in St Nicholas at Wade in 1763 and had five sons and three daughters.

The earliest record of the Emptage family is the will of Michael Emptiach of St Peters, dated 1489. 529 years later, over the weekend of 8/9th September 2018, twenty four descendants of branches of the Emptages of Thanet, together with their partners, gathered in St Peters in Thanet. Ten of those Emptages were direct descendants of Henry Emptage and Ann Peel, including four who had flown from the USA for the occasion.

And so, high on the agenda for all of us was a visit to the church at St Nicholas at Wade. Some attended the service on the Sunday morning, others arrived soon afterwards. Not only did we find a most delightful church and the Emptage memorial stones but an early parish chest in which the registers and other documents would have been kept.

Next: Gathering at the Viking Ship and Margate