You are here: Home / Regions / Barbados / The Origin of the Barbados Emptage/Emtage Family

The origin of the Emptage/Emtage family in Barbados goes back to the middle of the 18th century with the marriage of John Emptage and Elizabeth Stafford, by licence on the 10th September 1764 in St James, Barbados.

Over the years, the ‘p’ in the Emptage name was dropped to make Emtage the predominant surname in Barbados.

The arrival/appearance of John Emptage in Barbados in 1764 continues to be the subject of research and frustration, with links back to London and a possible dash of transportation being thrown into the mix.

Of John and Elizabeth’s 6 children, 4 survived to reach adulthood. Elizabeth, his wife, was pregnant with her 6th child, Benjamin, when the Great Hurricane of 1780 first began affecting Barbados with rain late on 9th October 1780. In St. Thomas, Barbados, the parish marriage registers, 1780 (RL1/49 page 209) stated that:

… a dreadful hurricane which began to rage with great fury at noon and continue with great violence till four o’clock the next morning, the 11th; At eight o’clock at night, St Thomas’s parsonage was demolished and the church where the Rector and his family sought shelter began to fall about two hours after, the Chancel fell while the family were in the church … St. Thomas’s Chapel, St. Michael’s, St. George’s, Christ Church’s and St. Lucy’s churches were totally destroyed, the other churches were severely ‘injured’ (except St. Peter’s and St. Philip’s). Because of the demolition of the parish church and chapel ‘divine services’ continued in the ‘boiling house’ at the ‘Rock Hall’ estate of Thomas Harper by Rev Wm Duke and curate Hugh Austin of St Thomas. Most other buildings and works were blown down and many lives were lost. The dead could not be brought to a church so were buried in gardens and private land.”

Benjamin was born in the November 1780, but wasn’t baptised until 23rd February 1782 aged 2 years and 3 months at the Parish Church, in St James, Barbados. 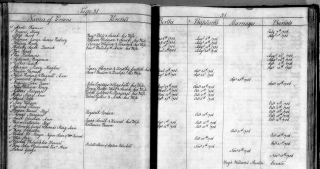 Jane Chandler Goodridge – John and Jane had one daughter.

During the Great Hurricane of 1831, an intense category 4 hurricane that left cataclysmic damage across the Caribbean, the main plantation house at ‘Mullins’ sugar plantation was badly damaged and the then owner, John Dixon Emtage and his family, managed, despite the high winds and tumultuous rains, to make their way somehow to the sugar mill, built in the late 17th century, in which they took refuge. On reaching the mill, however, John ‘Jack’ Emtage found that his wife and his infant daughter (possibly Elizabeth) were missing.

They could not be found in the stormy darkness and it was not until the morning and the storm had abated that they were found with their pony, huddled on a ledge 12 feet from the top of the cliff below the mill, having been blown over the cliff edge by the force of the storm. 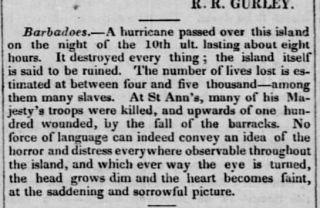 The Emtage family was very lucky, the Great Hurricane of 1831 slammed into Barbados, leveling the capital of Bridgetown on the 10th August. Some 1,500 people perished, either drowned by the 17-foot (5.2 m) storm surge that the hurricane brought or crushed beneath collapsed buildings (including the St John’s Parish Church).

An article in the Boston, Massachusetts’ newspaper – The Liberator on Saturday 10 September 1831, page 2 – highlighted the devastating damage.

John Emtage decided that he would build his new plantation house around the mill, their place of refuge and the sturdy walls of the mill became the home of the family after this disaster. The new home was built in 1832, incorporating a deep desire for safety and a great imagination to inspire the design. 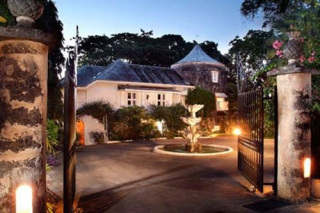 The sugar estate ‘Mullins’ owned by John Emtage in St Peter on the border of Speightstown – today is Mullins Mill which forms the core of a luxury holiday villa, available to rent from £17,500 per week.

There are 2 other interesting facts you may want to know about John Dixon Emptage:

1. He owed William Grannum Warde, son of Moses Warde – £200 and this was specifically called out in John Emptage, his father’s will proved on the 17th September 1845.

2. He was an architect and died on the 2nd September 1855 in St Peter. He died of sunstroke, whilst erecting a steeple on the parish church at Speightstown.

So let’s go back to the first John Emptage who married Elizabeth Stafford by license on the 10th September 1764 in St James, Barbados. He was buried on the 15th October 1798 aged 73 years, which suggests that he was born in 1725.

The Caribbean had seen significant conflict in the 1730s and 40s. In the Caribbean, the war of 1739-1748 actually fell into two phases. Up to 1744 it was an Anglo-Spanish conflict, with the West Indies being the focal point of Britain’s war effort, with over 60 ships, 20,000 sailors and 8,000 soldiers being deployed to the area. The second phase commenced in 1744, by which time the War of Jenkin’s Ear had merged into the general European conflict of the War of Austrian Succession, which saw the entry of France into the Caribbean conflict as an ally of Spain.

The normal route for shipping from England to the West Indies was to sail first to Maderia. Here convoys stopped to replenish their water and take on wine. This was probably the most frustrating part of the voyage, as the prevailing winds were contrary south westerlies. This made it difficult to get clear of the English Channel, particularly when a large body of slow and cumbersome ships was involved, as generally was the case, when convoying transports. It was further complicated on occasion by the need to meet victualling ships from Cork in Ireland”.

“From Maderia, the ships picked up the north-east trade winds and ran before them to Barbados. Most of the convoys from Britain called at Barbados first, both to water and to gain intelligence of the situation in the Caribbean. Unfortunately the island did not possess a good harbour, which prevented its use as a naval base. From Barbados, convoys usually proceeded to Antigua, about 300 miles away and would then complete their journey with a further five days sailing to Jamaica”…. the main British Naval base in the West Indies during this period……. “a further 500 miles away”.

“On average it took about eight weeks to get to Barbados from England”.

So perhaps John Emptage travelled to Barbados as part of the British Naval or military operations and remained in the Caribbean, perhaps he sailed on one of the merchant ships piling its trade in the West Indies at the time or maybe he was just extremely lucky and having been transported for a second time following the incident on the ship – the Plain Dealer – he somehow made his way to Barbados to start a new life.

One possible candidate is John Emptage, son of Humphrey Emptage and Sarah King, born on the 26th August 1725 at St Giles, Cripplegate, London. Interestingly, his grandfather John Emptage, Citizen and Joyner of London, had a brother, Thomas Emptage, late of the parish of St Mary, Rotherhithe in the county of Surrey, but also the Master of the Merchant Ship ‘St Peter’ in the West Indies (PROB 6/116 August 1740-PCC).

So what are the possible next steps to resolving this conundrum……consider searching for other Navy Board letters associated with the prisoners from the Plain Dealer, research the contracts awarded by the Treasury for Transportation, and continue the search in the Admiralty papers for references to the merchant ship “St Peter”.