Henry Joseph was born at 25, Stafford Place, Westminster, London, on the 22 April 1854 to parents, Henry John Emptage, a tailor aged 43, and mother, Susan Elizabeth (Austin). He was the eldest of four children and, like his father, he became a tailor.

His father, Henry John, was originally from Margate, the eldest son of Henry Emptage and Mary Ann (Watkins). Four of his siblings died young and his parents and three other siblings died in the cholera epidemic which spread through Kent in 1834. Henry John was left with just two siblings: John Kemp Emptage, about whom nothing is known following 1834, and Joseph Isaiah, who became a merchant seaman and settled in Margate.

Henry Joseph’s mother died aged 41 in 1863 and by 1864, his father, with four young children to look after, had married again.

Aged 17, Henry decided to emigrate and he arrived in New York on 18 June 1871 to start his new life but the next 15 years of Henry’s life were to become rather complicated.

Army records show him going from state to state over a period between 1875 to 1879 as he enlisted but then deserted.

Henry deserted in Illinois in 1875 but enlisted in New York in 1878. Deserting once again he turned up just twenty four days later at Fort Wallace on 27 November, but once more he deserted, on 27 February 1879.

Then there is no sign of him until 14 January 1884 when Henry turns up at Fort Marcy in New Mexico and enlists into the 22nd Infantry. Staying true to his normal behaviour he deserted on 27 May. 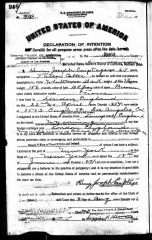 However, Henry turned up again on 7 April 1886 when he married Emma W.F. Schultz in Walla Walla County, Washington. He seems to settle down then and by 1888 they are living in Los Angeles, with Henry earning his living as a tailor/cutter.

Over the next six years Henry and Emma had four children: Henry Charles, Steven Alfred, Isabel Emma and Alma Margaret.