You are here: Home / Events / Dedication Service of the Victory Lugger Memorial Stone at Margate

The nine men crew of the Victory Lugger lost their lives when their boat was swamped by terrible seas during their attempt to rescue the crew of the American sailing ship Northern Belle which had foundered on rocks off the most south eastern point of England, off the coast of Kent, on 5th January 1857.

Appeal and The Memorial Stone 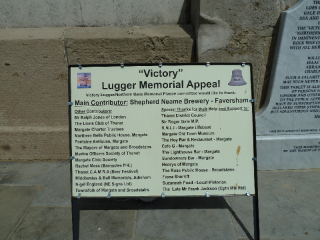 All the men were from Margate and, following the disaster, a memorial stone was erected to commemorate their valiant actions. Unfortunately it had to be removed many years ago after falling into disrepair. And so, at the beginning of 2013, a public appeal was launched to replace the stone. 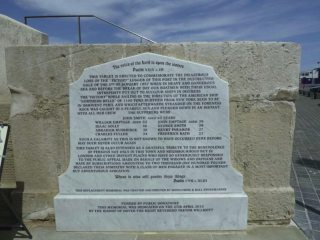 The sum of £6000 was raised, marble was imported from Italy, and it was engraved by a local master stonemason. 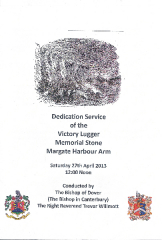 On 27th April 2013, a service to Dedicate the replacement Memorial Stone was held on Margate Harbour Arm where it had been set into the wall. 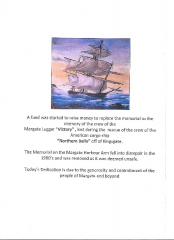 It was conducted by the Bishop of Dover in the presence of clergymen, civic dignitaries and descendants of the men who had lost their lives.

The procession was lead by a band, lifeboat men, coastguards and members of the British Legion. In recognition, the modern lifeboat was drawn up on the slipway close by.

Although none of us are directly descended from William and John, the two Emptages who died, nine descendants of the wider Emptage family were present, including one who is carrying on the maritime tradition as a member of the coastguard service.

Four other Emptage men took part in the rescue of the crew of the Northern Belle, on board the lifeboats: George Henry, Charles William, Edward Lindsay and Alfred Burnett. They were brothers and were the nephews of William and the cousins of John. Alfred was the youngest, aged 25. He was my great great grandfather Alfred.

Included in the service was the hymn “Eternal Father, strong to save”. It is perhaps best known for the last line of each verse “for those in peril on the sea”.

We are a maritime island nation. It is a hymn which has been sung at many services through the years. I have sung it before but never again will I do so without thinking of those nine men who died in the rescue attempt and of my great great grandfather and his three brothers and the other mariners who saved the crew of the Northern Belle in terrible weather in January 1857. 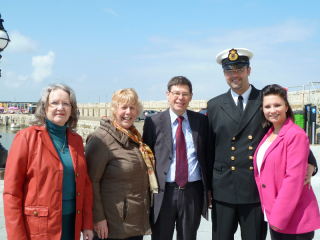 Unfortunately, our Emptage coastguard was on duty and neither he nor his sister could attend the reception afterwards, so we took photos on the harbour arm, after the service.

At the reception after the service, the Emptage descendants, spanning three generations, got to know each other. I had drawn and taken with me a family tree which showed the relationship of those who I’d been told were attending but I found there were four others present from another branch of the family and have since updated the tree. 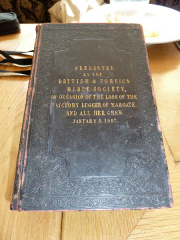 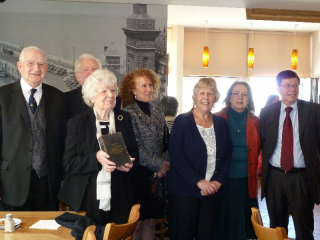 A local man with an interest in history told how, some 20 years previously, he had found one of the bibles which had been presented to the families of the crew of lugger Victory after the appalling tragedy.

It was in a second hand shop and he’d bought and kept it. It had originally been presented to the daughter of William Emptage and the current owner was hoping to return the bible to one of William’s rightful descendants. Unfortunately, there was no one present from that branch of the family but I hope that the rightful heir will be found one day.

When I started researching my mother’s family history 13 months ago, I had no idea of her family background. What I found is a family steeped in British maritime tradition. My great great grandfather, his three brothers, his uncle and his cousin were men to be proud of, heroes born of a seafaring nation.

I was proud to be at the service of dedication of the memorial stone to those who died, feeling that by being there, I was not only honouring those who died but also those who lived and successfully rescued the crew of the Northern Belle in January 1857, in the most appalling weather conditions. 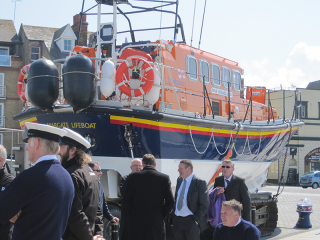 The presence of the modern lifeboat was a reminder that men still go to sea to rescue those in peril on the sea and a sad reminder of the lifeboat men from around this island country who have lost their lives during my lifetime.

An email from my cousin, David Lindsey Emptage, was published on the Thanet Coast Life blogspot.  This is an extract from it:

“My name is David Lindsey Emptage and I now live in Melbourne Australia.  It is only in these past 12 months that during research of my family history, have I come to know about the Emptages who were not only Mariners, Boatmen, Fishermen but also Lifeboatmen.

After reading of their exploits I am so proud of those men and what they stood for. The losses sustained during the Northern Belle rescue is heartbreaking and one only hopes that their widows and families were provided for either by donation or monetary assistance from the United States.

I want to thank you for the wonderful story you have written on your Thanet coast life blogspot. I found it very moving and it brought me so much closer to my relatives than I ever thought possible.

The tyranny of distance has curtailed me from attending the commemoration on the 27th and I will sorely miss being there on the day, but there will be cousins of mine from around the country who are definitely going. I will look forward to their photos and stories.

I wish you a wonderful day on the 27th and I will raise a glass to all those lifeboatmen past and present who selflessly lay down their lives to save others.  Good cheer.”

It was indeed a wonderful day.

This is Kent, gallery of pictures of the event

Thanet Coast Life, gallery of pictures of the event