You are here: Home / Events / The Brigantine Sarah – A Gallant Rescue by the Margate Lifeboat

A strong easterly gale swept across the Thames estuary 25 January, 1871 and at Margate heavy snow squalls reduced visibility considerably. Consequently it was not until very late in the morning that a collier brig was seen to be aground on the Margate Sand, continually swept by the seas. 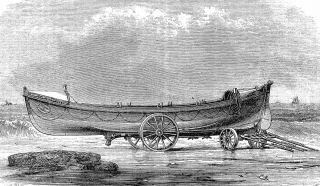 By the time the horses had been summoned and the lifeboat hauled from its house on the stone pier to the water it was past mid-day. Both the RNLI lifeboat Quiver and local lugger Ocean went to the rescue but it was the shallow draft of the Quiver which allowed it to get to the semi-submerged wreck of the Sunderland brig, Sarah, 243 tons, which, fully laden with coal, was on a voyage from her home port to Southampton.

Her crew of six men had taken refuge in the foremast rigging and found great difficulty descending to the deck, which was completely awash. There was already four hours of the flood tide, which did not make the lifeboatmen’s task any easier. The surf crashed against the ship, crushing it against the hard surface of the sand and swirling ropes and deck gear in all directions.

One of the brig’s crew was close to total exhaustion and the Quiver’s 2nd coxswain, William Jones, while trying to help him had his leg caught in the grapnel line which secured the lifeboat to the wreck. As a result he was nearly dragged overboard and lost. Finally, after a great effort all six were saved and bought back to Margate in a rescue which had taken just over three hours including the time for beating out and sailing back to Margate.

It was learned from those saved that the Sarah had struck the sandbank just after 2.30 in the morning. The ship’s boat was immediately smashed when they tried to launch it and, after vain attempts to gain attention by setting fire to the captain’s mattress, they had no other course for survival but to climb the rigging. The twelve hours they endured there were the longest in their lives.

Blinded by sleet and snow they clung together in the foretop, the cold gradually penetrating their clothing and then eating into their bones. Periodically they were lashed with spray. Frostbite found two victims who had lost, or had not time to put on, their seaboots. Dawn brought relief and some small vestige of hope but it took great effort, mental and physical, to hold on in such perilous surroundings. Ages seemed to pass before someone saw the Margate lifeboat close at hand.

Mr. Stranack, Honourary Secretary of the Shipwrecked Mariners Association, arranged for the men to go to the Queen’s Arms, the two who could not walk being taken by cab. There they were treated by Dr. Hunter and fed by the landlord. The brig which was probably built in Sunderland was uninsured.

Margate lifeboat coxswain William Grant was voted the RNLI Silver Medal for ‘His general valuable services in lifeboats’, culminating in the service to the SARAH on 31st January 1871′.

The winter of 1870/71 was particularly severe and caused a large number of brigs to be weather bound in the coal ports on Northumberland and Durham. An improvement in February, resulted in large convoys bound for London, the south coast and the continent.

I believe these details come from a charming little publication called “Bygone Kent”.