You are here: Home / Events / Terrible Gales of November 1893

In November 1893 terrible gales of exceptional violence raged throughout England, Wales, Scotland and parts of Ireland for three days. Many lives were lost. The storm at sea was even more violent than the storm inland; a large number of ships foundered or were driven onto rocks to be dashed to pieces by the fury of the waves. The crews of many ships were missing. The record of casualties inland and at sea, including along the French coast, was appalling. 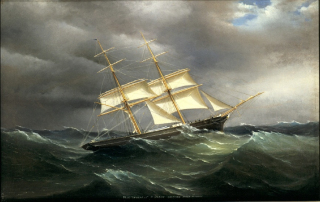 On the 18th November, a two masted sailing ship, the brigantine Druide of Cardiff, which was sailing from Cherbourg, was in dire straits in heavy seas in the gale. It anchored off shore but at 7am the vessel parted her anchors and she was driven ashore on rocks opposite Fort Point, Margate.

The regular coxswain of the lifeboat Quiver was ill and the second coxswain, Edwin Robert Emptage was asked to head the lifeboat out into the raging seas and rescue the crew of the Druide. However, Edwin considered the risks too high and refused to put the crew and boat at risk.

The Secretary of the RNLI asked the bowman, J. Knight, to go out and he took to the seas with a crew. They were beaten back by the waves and returned to harbour. Another attempt was made, but the boat became waterlogged and had to return once more to shore.

It was discovered that the second coxswain Edwin Robert Emptage had not secured the deck plates, so allowing sea water to enter the boat. She was pumped dry and a third attempt was made but the lifeboat was unable to reach the Druide and, in great peril, anchored off Nayland Rock.

A steam tug towed the Ramsgate lifeboat to the scene but the lifeboat was unable to get near the Druide as it was too close to the land.

At 10.30am, Albert John Emptage, Master of the Moss Rose pleasure yacht, mustered a crew for the skiff (a small boat, just 22 ft long) from the Moss Rose to attempt the rescue of the crew from the Druide. Five men volunteered: Edward Whitehead, George Sandwell, John Cox, John Taylor and Arthur Twyman. They rowed out in the Moss Rose skiff amidst cheers from hundreds of onlookers lining the sea front and jetty.

Several times the little craft was nearly swamped and overturned by the heavy surf but, by hard rowing, constant baling and great skill, the skiff eventually made its way to the stricken Druide. They got close enough to the side for the five crewman of the Druide to jump into the skiff, and then it was rowed back to shore to the cheers of the onlookers. 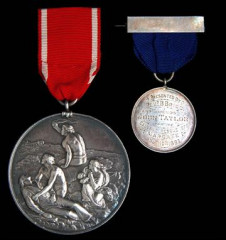 All six men were awarded the Sea Gallantry Medal by the Board of Trade in recognition of their gallant services in rescuing the shipwrecked crew of the brigatine Druide. The image shows the medal awarded to John Taylor. They also received silver medals funded by public donation.

The MP for Camberwell North, Mr EH Bayley, appeared intent on making political points out of the way the lifeboat system was run. Three weeks later, on 7th December 1893, a long letter he had written was published in The Standard newspaper, under the headline “Nationalising the Lifeboat Service”.

He described how, on 20th October 1893, the Mablethorpe [Lincolnshire] lifeboat had arrived at Saltfleet by road, in response to distress signals by two vessels, the Annie Florence and the Olive Branch. The state of the tide had made it impracticable to launch the lifeboat. Three of the crew of the Annie Florence came ashore in their own boat and the remaining six were rescued by the coastguardmen.

When the tide changed and the lifeboat could have been launched, the lifeboat men refused to do so. Though remonstrated with, they ate a meal at the Ship Inn and then went home without attempting to launch their boat. They were hissed at as they drove off, leaving the six men on the Olive Branch to drown within sight of land.

Bayley had attended the inquiry into what he described as the Mablethorpe lifeboat scandal. He had not been satisfied by the manner in which the inquiry had been conducted, calling it a farce. The members of the Court were a gentleman from the Board of Trade, an inspector of the Lifeboat Institution and the Honorary Secretary of the very lifeboat whose crew was under investigation.

He had stayed to conduct his own inquiry, interviewing witnesses including a Lloyd’s agent and honorary secretary of another lifeboat (with twenty years experience of life-saving work), coastguards and pilots. All agreed that there was no reason why the lifeboat could not have gone to the rescue of the crew of the Olive Branch.

Bayley wrote that “a more hideous neglect of duty has seldom been recorded”.

In his view, what appeared to him to be “an almost equally scandalous fiasco” took place off Margate just a month later. He referred to the second coxswain refusing to go out, the boat having been launched but blundering about and failing to reach the wreck, and the Ramsgate boat also attempting, unsuccessfully, to assist.

Bayley’s letter concluded: “Could such occurrences as these happen, if the crews were disciplined and under trained and responsible officers, subject to the public authority, instead of being under a private money getting society like the Lifeboat Institution? Nothing short of a Royal Commission will disclose fully the imperfections and iniquities of the present system.”

Not content with his letter in The Standard, the following day, Mr EH Bayley rose in the House of Commons to address the President of the Board of Trade.

“Mr EH Bayley (Camberwell N):
“I beg to ask the President of the Board of Trade whether he is aware that during the recent gale a vessel, the Druid, was wrecked off Margate, that the Margate and Ramsgate lifeboats failed to render any assistance, and that the crew would have been drowned but for the heroic conduct of Mr. Emptage, owner of a pleasure yacht, who gathered a few boatmen about him and saved the crew of the Druid in an ordinary shore boat; and will he order an inquiry as in the case of the Mablethorpe lifeboat?”

“Mr Mundella:
“I am aware of the circumstances referred to in the question. It appears that the Margate lifeboat was launched within 20 minutes, but was temporarily disabled, and before she could again proceed the crew of the Druid had been rescued. It was, I am informed, impossible for the Ramsgate boat to get at the Druid, because of her position under the cliffs. I do not propose, under the circumstances, to order an inquiry to be held into the stranding of the Druid. I shall consider how I can best recognise the excellent services performed by Mr. [Albert] Emptage and his brave comrades. He has, I understand, been already appointed second coxswain of the Margate boat. It is only fair to add that the Ramsgate lifeboat is managed by the Board of Trade.”

Although the President of the Board of Trade was not minded to order an inquiry into the events, a District Inspector [presumably of the Lifeboat Institution] did so. Edwin was suspended and found guilty of gross neglect. He later resigned his position as second coxswain of the lifeboat Quiver.

As family historians, we are meant to present the facts, not make judgements. However, there are times when it is difficult not to do so.

It seems clear that, still sensitive to the ramifications of the Mablethorpe event, which do seem to have truly been scandalous (though in the interests of fair play, we should say that we have no idea of the Mablethorpe lifeboat crew’s version of events), the Lifeboat Institution was determined to make an example of Edwin Robert Emptage. At any other time, the results of the local enquiry may have been quite different.

I am relieved that moves to nationalise the lifeboat service failed.

Edwin was a fifty-four year old married man with a wife and eight children to look after, and was a seasoned Mariner. His long standing in the community as a volunteer lifeboat man and his age, seemed to make no difference at the inquiry to which he was subjected.

On that fateful day, Edwin had to make a judgement call on the safety not only of himself as a family man but of his crew as well. If he had taken them out in that appalling storm and they had lost their lives in the rescue attempt he would have been branded as incompetent at least.

He was blamed for not securing the deck plates which allowed sea water to enter the boat but he had already made a decision that it was too risky to make the rescue attempt at that moment. The bowman who subsequently took command should have, in my opinion, checked that the boat was secure for launching.

No one is doubting the heroism of all involved and Edwin had to live with the knowledge that his cousin, Albert John Emptage, took command of the situation that day and secured the rescue of the five men from the Druide.

I wonder, if Albert’s rescue attempt had been a failure and men had died, would Edwin still have been subjected to any inquiry?

I hope that, irrespective of the District Inspector’s inquiry, the local people, well experienced in the ways of the sea on that coast, would have supported Edwin’s decision. And that Edwin was able to get on with his life as a Mariner and was not criticised by the local community in the remaining years he had left. Edwin died in 1916 aged seventy-six.

Edwin Robert was born in 1839, the son of William Emptage and Elizabeth Peters and the grandson of Henry Emptage and Susannah le Brush.