Ancestry: Cyril was descended from Elijah Emptage and Martha Hatcher, who married in 1792, in Birchington, Thanet.

Siblings: Clifford Walter, born in 1889 and Gladys Marion, born in 1898. Both were born in Thanet.

Lived: By 1901 the family had moved to Ashford and by 1911 they were living in Camberwell, south east London.

Employment: Cyril was an apprentice engineer before he enlisted.

We are confronted with the absence of recorded material which is so frustrating for researchers. Cyril’s brother Clifford Walter, who was also in the 21st London Regiment, at least had his Pension Records still available which gave some, if not all, a glimpse into his military life.

Cyril was 4 years younger than his brother Clifford. Seeing Clifford home on leave in his smart new uniform, with his 21st London Regiment cap badge gleaming, must have spurred Cyril to join up in the same regiment as his brother.

Because of the lack of available records we can only surmise that Cyril enlisted as soon as he was old enough. Clifford had enlisted in to his regiment in 1908, though only for one year before transferring to the reserves. Cyril, being 4 years younger, more than likely joined up in 1912.

Because they were both career soldiers and had enlisted before the start of WW1, both rose through the ranks very quickly. Cyril became a Sergeant and Clifford, a Colour Sergeant Major.

Like his brother, Cyril became part of the Machine Gun Corps which was formed on the 14th October 1915 to make better use of the machine which was still a new weapon. They had a base depot and training ground in Belton Park in Grantham Lincolnshire, and another base depot in Camiers in France.

Cyril’s brother, Clifford was injured by a shell in November 1915 and he was sent back to England to recover. He became a machine gun instructor, and never went back to France. He was the fortunate one, because Cyril was tragically killed on the opening day of the Battle of Lys and died of his wounds on 9th April 1918.

The Battle of Lys

The Battle of Lys was part of the 1918 German Spring Offensive ordered by Luderndorff in a final attempt by the Germans to break the Allied lines around Ypres. The Battle of Lys can go by numerous titles and has been called the Fourth Battle of Ypres, the Lys Offensive and the Third Battle of Flanders.

By the Spring of 1918, the Germans knew that they faced a major problem on the Western Front. Since the American declaration of war, American soldiers had arrived in Western Europe in very large numbers. The German High Command knew that these numbers would only dramatically increase given time. The Spring Offensive was an attempt to defeat the Allies before the full might of the Americans reached Western Europe.

The aim of the Battle of Lys from the German point of view was to capture Ypres (Ieper) and the surrounding high ground around Messines. 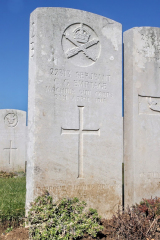 Sergeant Cyril George Emptage of the 21st London Regiment ( 22313) was buried in plot 11. B. 1. of the Aire Communal Cemetery, Pas de Calais.