You are here: Home / Miscellany / Patron Saint of Family Historians

In despair after yet another bruising encounter with weird and fanciful public member trees on Ancestry, I felt in need of spiritual help to restore my faith in the process in which so many of us are engaged.

I wondered: do we have a patron saint?

I couldn’t find any saint listed for family history or genealogy but it seems that members of the Canterbury branch of the Kent Family History Society have been asking the same question:

Patron Saint of family [history] researchers – is there one? We would be pleased to hear who it is. But until one comes to light perhaps the honour should go to St Theodore of Tarsus, Archbishop of Canterbury (668 – 693 AD) who planned the administrative divisions of the church into dioceses and parishes. These church records being the major source for family research especially before civil registration in 1837.”

I should declare an interest: I have a natural affinity to Canterbury, which is where my mother, an Emptage, was born but I would not let that blind me to any other saint’s claim to be our patron saint. 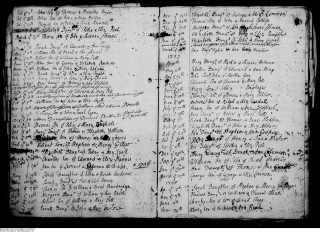 As somebody who has spent more hours than she cares to think about, poring over the registers for the parishes in the Isle of Thanet and elsewhere in Kent, I am exceedingly grateful for these important sources of information about our ancestors.

[The image shows the baptism entries for Henry Emptage and Ann Peel in 1737 in the church of St Nicholas at Wade, in Thanet.] 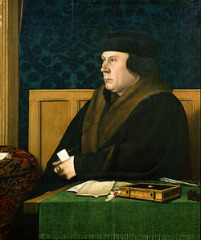 Click on the image to view
in full size

Until now I have always given thanks to Thomas Cromwell, the English lawyer who became the Lord Great Chamberlain in the reign of King Henry VIII. As the king’s chief minister, he was responsible for the laws and administrative procedures which made the English Reformation so important, the effects so long lasting.

In 1538 Cromwell decreed that each parish should keep parish records of births, marriages and deaths. The keeping of such records would provide information when disputes arose about inheritance, who was married to whom and other such queries. 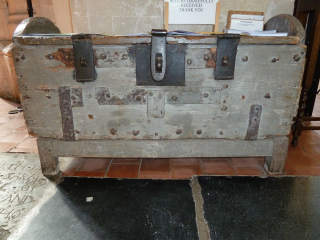 The parish chest of St Nicholas at Wade,
which secured the registers.
The registers included entries for the baptisms of
Henry Emptage and Ann Peel
in 1737 and their marriage in 1763.
Photographed by the author in April 2013.
Click on the image to view in full size


They were to be kept in a securely locked parish chest, with two locks. One key would be kept by the vicar, the other by a church warden. The records, which were kept on loose sheets of paper, would be entered by the one in the presence of the other.

Sad to say, not all vicars and church wardens were keen on this addition to their job description (especially without extra pay) and whilst some did take on the job, others refused to do so, even though the parish could be fined for its failure to do so.

My admiration for Cromwell’s administrative skills is not totally unqualified as he was behind much of the outcome of Henry splitting from the church of Rome and the subsequent dissolution of the monasteries. And, as such, he is an unlikely candidate for sainthood.

And so we consider Saint Theodore of Tarsus for our patron. 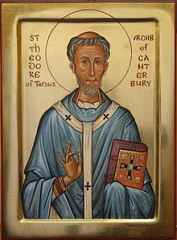 Theodore was of Greek descent, born in Tarsus, an ancient city in the Roman province of Cilicia (on what is now the southern Mediterranean coast of Turkey). Forced to flee his home by wars, he later studied a wide range of subjects in Constantinopole and Athens. By the 660s, Theodore was a learned monk, living in Rome, in a community of eastern monks.

In 667, the see of Canterbury fell vacant. Ecgberht (Egbert) king of Kent, and Oswy, king of Northumbria, had jointly proposed Wghard, a priest in Canterbury, for the position and sent him to Rome for his appointment to be confirmed. Unfortunately, he unexpectedly died in Rome.

Faced with a vacancy to fill, Pope Vitalian chose Hadrian, an abbot of a monastery in Naples but he declared himself not up to the task. Hadrian recommended his friend, Theodore, who was then appointed by the Pope to be the Archbishop of Canterbury. As Hadrian had previously been to England on two occasions the Pope decreed that he should accompany Theodore.

Theodore was consecrated on 26 March 668 and they left Rome two months later. The journey overland took a year, including a stay in France over the winter.

Theodore was already 67 years old but he arrived in England with the energy of a much younger man. He visited most parts of the country whilst conducting a survey of the English church. He appointed bishops to vacant sees and instituted reforms which were confirmed by the Synod of Hertford in 673. Theodore worked to heal rifts in the church in England between those who followed Rome and those who followed the Celtic church of Ireland.

However, his revision of the dioceses were not always welcomed by those bishops who subsequently found that part of their diocese had been taken to establish new dioceses. Theodore’s restructure of the dioceses and parishes not only survived the Reformation but is still substantially intact today.

Theodore’s reforms provided the base for the church administration system, not just for the parish registers which were to come later but for the collections of wills and many other records held by and administered by the church over many centuries and which family historians rely on so much.

Theodore was loved and respected by the Anglo-Saxons in whose country he had worked for so long and so hard. And, as we believe that the Emptages are descended from the Anglo-Saxons, what was good for them is good enough for me.

Now, how does one go about declaring St Theodore of Tarsus to be the patron saint of family historians?

My thanks to the Canterbury branch of the Kent Family History Society for pointing me in the direction of St Theodore of Tarsus, Archbishop of Canterbury.

Hadrian was also a scholar and an administrator. He became the abbot of St Augustine’s Abbey in Canterbury. Together with Theodore, he set up an ecclesiastical school in Canterbury, which became an important centre of Anglo-Saxon learning. Hadrian later became St Adrian of Canterbury.

It wasn’t until 1598 that the order was given for the parish records to be entered into a bound book or register. The existing loose pages were to be transcribed into the registers, perhaps giving rise to the first transcription errors in family history. Unfortunately, some of the pages had been lost or, if they had been paper rather than parchment, had disintegrated, hence the infuriating gaps which we find today.

Biographical sketches of memorable Christians of the past