You are here: Home / Miscellany / Respect is due 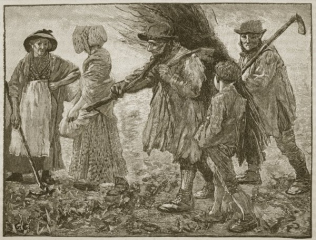 The picture is taken from Cassell’s Illustrated History of England, showing agricultural labourers at the time of the First Reform of Parliament in 1832.

When I thought about Thomas Hepburn being transported to Van Diemen’s Land (Tasmania) in 1831, I wanted to know what machinery he was accused of breaking and why he had done it.

As I began to research the events which lead to Thomas’ actions and then discovered the impact those actions by Thomas and others had on the country, both socially and politically, I was truly amazed.

I am not an advocate of civil disobedience but it is clear that, over the years and in many cases, improvement in people’s living and working conditions have come about because people have been willing to fight for their beliefs and rights.  I have the right to vote because of the action taken by women of the suffragette movement.

In school history lessons I learnt of the Tolpuddle Martyrs, agricultural workers from Dorset.   They had formed a trade union in the hope of bettering their working conditions.  Just like Thomas, the Dorset men were defending their rights.

Such a trade union was legal but to hold meetings in secret was not.  Like Thomas and only three years later, the six leaders were sentenced to transportation.  There was a large protest campaign, with petitions and demonstrations in London.  It was successful and the six were returned home.

It seems to me that we owe our ancestors rather more respect than is normally accorded to the agricultural labourers who feature in our family history.

Read about Thomas Hepburn at: The Swing Riots of 1830