You are here: Home / Miscellany / The Truth Is Out There!

At any given time, the members of Team Emptage are researching a number of different strands of our Emptage heritage.

Always occupying our thoughts is how to establish the link between the Emptages who arrived on the Isle of Sheppey and those who lived for many hundreds of years on the Isle of Thanet. Sheppey is still a recognisable island off the east coast of Kent, not so many miles away from Thanet (which is no longer an island as the navigable channel which separated it from the mainland silted up many years ago).

By modern roads, Queensborough, the port in Sheppey where the Emptages settled is just 44 miles from the Thanet ports of Margate and 46 miles from Ramsgate, where many of our ancestors lived and worked. However, given the seafaring nature of many of the Emptages on both isles, it is highly possible that a seaman from Margate or Ramsgate sailed into Queensborough, met a girl and married her, setting set up home there.

We have three members of Team Emptage who are descended from William Emptage, who is thought to have been born around 1720. He married Ann Fisher in 1746 in Queensborough and began a family of Emptages who not only lived in Sheppey but whose descendants went on to Grimsby and began another branch of our family.

It has been much easier to establish the link between the Sheppey and the Grimsby Emptages. James Emptage of Queensborough married Charlotte Messenger in 1816 in Gillingham, Kent. They set up home in Queensborough, where the first two of their children were born.

James was in the coastguard service and by 1822 the family had moved to Sussex, where they had a son. Within three years the family arrived in Devon, where three more children were born. By 1831 James had moved his family to the coast of Yorkshire, where he became the Chief of the Coastguard in Filey.

James died in 1841, aged 46, at Flamborough Head, a place of rugged and dangerous cliffs a few miles south of Filey. Two of his sons married girls from Grimsby, about 70 miles south of Filey, and so the Grimsby branch of the Emptages was established.

There is another branch of the Emptage family in Barbados, from which one of our team members is descended. She is engaged in establishing the link back to England and part of her research involves John Emptage, who, as the court records show, as a young man in 1745, was transported from London to the Americas for stealing a tea chest, eighteen years before the first Emptage sailed into port in Barbados.

Regular readers of this website will be aware of the incredible effort we put in to researching the facts concerning our ancestors. Of course, the further back we go, the more difficult it becomes. Sometimes we draw reasoned conclusions and other times we may advance an hypothesis based on the somewhat limited evidence we have gathered as we’ve travelled through time. Roger Emptage has gathered together a number of Emptage strands and presents his hypothesis here. Enjoy!

James Emptage was a Chief Officer for the Coastguard who lived in Filey, Yorkshire and was married to Charlotte Messenger. 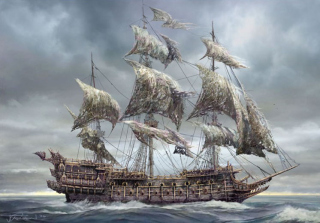 In 1841 he was last seen leaving his cutter off Flamborough Head and boarding a Dutch ship De Vliegende Hollander which he suspected carried contraband Advocaat and fake Vermeer paintings. As none of his colleagues or family ever saw or heard from him again, they feared that some misadventure had befallen him and that he had perished. 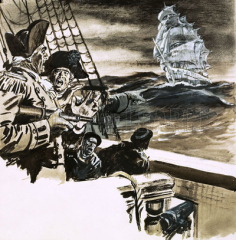 However, once on board, James had found himself steering the ship, one which seemed doomed to sail the oceans forever. The ship’s rigging was torn and tattered as it was battered by storm after storm, century after century.

The ship was lit by a weird light, which struck such fear into those who encountered the ship on the high seas, that they desperately turned and fled from the terrifying sight.

So, alas, no one discovered that James was being forced to steer a ship crewed by aliens from another planet, intent on an invasion of Earth until one day, quite suddenly, accompanied by a strange grating and grinding noise, a blue police box appeared from out of nowhere and landed on the quarterdeck.

The door opened and The Doctor and his travelling companion Clara stepped onto the deck. For fifty minutes they and James fought the aliens and succeeded in disposing of them and preventing the invasion. During the fight, James saved the life of Clara.

James refused his reward of a return home in the TARDIS, telling them he had long given up any hope of going back to his old life. He did ask the Doctor to promise him one thing — that the Doctor would go back in time to find him as a young man and save him from the fate that would otherwise inevitably befall him.

True to his word the Doctor found James, then an infant in Sheppey. He blanked James’ memory, gave him the new name of John and deposited him in Margate to seek a new and different life. ‘Why did you choose Margate?’ asked Clara when they were back in the TARDIS.

‘Oh, to even things up a bit’, replied The Doctor. ‘I once helped a young couple who wanted to keep their names secret go the other way from Margate to Sheppey. They had a son, born in 1720. Now, what was his name? Ah, yes, William; that was it’.

Meanwhile, the older John/James smiled as he set course for his destination and a new life. He thought of the chests full of tea in the hold which the crew had forced him to steal in London. They were worth a pretty penny and would assuredly make him a very wealthy man when he eventually reached Barbados.

Barbados is an island in the Caribbean Sea, where a ghostly ship, with a strange captain and even stranger crew, is thought by some to sail through eternity, with occasional encounters with pirate “Captain” Jack Sparrow.

Pirates of the Caribbean

The Dutch ship De Vliegende Hollander is more commonly known as The Flying Dutchman, a legendary ghost ship which could never make port but which was doomed to sail the oceans forever. It was first reported in the latter part of the 1700s.

The Flying Dutchman: legend or reality

Advocaat is a traditional Dutch rich yellow alcoholic drink made from eggs, sugar and brandy. Advocaat is the Dutch word for lawyer and the drink was described in 1882 as a good lubricant for the throat, for lawyers who must speak in public. Perhaps it is something to remember if any of us are called upon to advocate for others, especially if we need a little Dutch courage.

Johannes Vermeer was a Dutch painter in the 1600s who produced domestic interior scenes of middle class life. He was painstaking in his approach, which meant that each painting took time to produce. And he used the best pigments in the process. Both considerations made his paintings expensive to buy and his output was not prolific. His work is now much admired for his technique and use of light.

Dr Who is a Time Lord, a space and time travelling Gallifreyan, whose space ship is the TARDIS. It is based on the external design of British blue police boxes which were common in Britain in 1963 when the Doctor made his first reported appearance in Britain. Pre personal radios or phones, the blue telephone kiosks allowed members of the public or police officers direct contact with the police station. Larger than the public red telephone boxes, they provided mini offices for police officers on their beat, even being used to hold a prisoner until transport arrived.

‘The Truth is Out There‘ was the catchphrase of FBI Special Agents Fox Mulder and Dana Scully as they investigated the X-Files which were marginalised, unsolved cases involving paranormal phenomena in the 1990s and early 2000s.

My thanks to Wikipedia for the above links.

My thanks go to the following websites from which the images used in this article have been used: