You are here: Home / Miscellany / Yeomen of England

In the wills and testaments of our early Emptage ancestors and in the occupations given in the parish registers, both for male Emptages who married and for the spouses of female Emptages, there are several references to a person being a yeoman.

It is clear from the wills that they held land, tenements, stock and crops and were quite well off.

I dimly remember hearing on the radio reference to a song called Yeomen of England but what was a yeoman?


Elizabeth I became Queen in 1558 and from Elizabethan times to the 17th Century and beyond, the title of yeoman was used to denote a free man owning his own farm, either as a freeholder or a leaseholder. 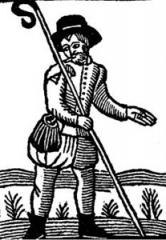 The yeomanry was a respectable, honourable rural middle class which ranked below nobility and gentry but above tenant farmers, husbandmen, artisans and farm labourers.

In effect, a yeoman was member of a class of small landholders of common birth, of lower class than a gentleman, who cultivated his own land.

The wealth and size of a yeoman’s landholding could vary but many were prosperous and wealthy enough to employ servants and farm labourers and even rent land to the gentry.

Sir Anthony Richard Wagner, Garter Principal King of Arms wrote that “a Yeoman would not normally have less than 100 acres” (40 hectares) “and in social status is one step down from the Landed Gentry, but above, say, a husbandman.” (English Genealogy, Oxford, 1960, pps: 125-130).

The Concise Oxford Dictionary, (edited by H.W. & F.G. Fowler, Clarendon Press, Oxford, 1972 reprint, p. 1516) states that a yeoman was “a person qualified by possessing free land of 40/- (shillings) annual [feudal] value, and who can serve on juries and vote for a Knight of the Shire. He is sometimes described as a small landowner, a farmer of the middle classes”.

The Berkshire Family Historian has an article entitled The way we were which features extracts from an anthology of Elizabethan writing revealing the differences between the social classes in the time of the first Queen Elizabeth, including:

“Those whom we call yeomen next unto the nobility, knights and squires, have the greatest charge and doings in the commonwealth, or rather are more travailed to serve in it than all the rest. I call him a yeoman whom our laws do call legalem hominem, a word familiar in writs and inquests, which is a freeman born English, and may dispend of his own free land in yearly revenue to the sum of 40s. sterling: this maketh (if the just value were taken now to the proportion of monies) £6 of our current money at this present. This sort of people confess themselves to be no gentleman, and yet they have certain preeminence and more estimation than labourers and artificers, and commonly live wealthily, keep good hours, and do their business and travail to acquire riches.”

The website features a woodcut of a sixteenth-century yeoman which I’ve used to illustrate this article.

As I know from my study of my paternal family, generation after generation of farmers in Wiltshire, by the time of the 1841 census, whilst there were still farmers who referred to themselves as yeoman farmers, many had become tenant farmers as the independent farms had been taken over by the large estates. However, some tenant farmers also continued to own some of their own land as well.

But, for the Emptages, there seems to be no one retaining even the title of tenant farmer, let alone yeoman farmer. Sad to say, by the 1841 census, the agricultural branch of the Emptages had been reduced to the status of agricultural labourers, many of whom lived in poverty and sometimes in the workhouse.

At this stage in our research we are left wondering what happened to the fortunes of the land owning Emptages to bring about such a loss of status and lifestyle.