The Wyandot County Republican, published the following obituary on December 20, 1894:

“Grandma” Emptage dies in her home near Marseilles, Ohio 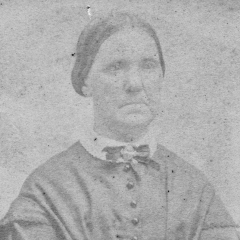 We are called upon to record another death, this time of an aged lady, Mrs. Anna Emptage, more familiarly known as “Grandma” Emptage, who died at her home near Marseilles Monday night. She was born in Chatham, England, on June 16, 1809, making her age eighty-six years and six months. She came to this country with her husband over fifty years ago and has been a resident of this country nearly ever since.

Her husband, Thomas Emptage, died in 1879, she surviving him nearly sixteen years. She was the mother of eight children, leaving four sons, thirteen grand children and twelve great grand children to mourn her loss.

She had enjoyed perfect health until the last year, then being confined to her bed nearly a year. Her’s was a quiet life, showing forth its goodness not so much in words as in deeds, and in her last illness anxious not to be a care to those around her but to depart and be with those “who had washed their robes in the blood of the Lamb.” The funeral occurred from the residence yesterday and she was laid to rest in the Fehl cemetery.”

Ann Homersham Emptage and Thomas Emptage (1802-1879) along with their two young children emigrated to the US from the Isle of Thanet in 1835.

Ann and Thomas had a family Bible that was published in 1852. Here she recorded her family’s births, baptisms, marriages and deaths. From the handwriting and ink it appears that most of the records were likely written at the same time, probably soon after either her oldest daughter’s marriage in 1856 or untimely death in 1857.

It is clear that Ann had a fuzzy memory of dates. She did not list a birth year for either her or Thomas. She gives her birthday as June 12th and her birth year calculated from her tombstone is 1808 (not 1809 as written in her obituary). Her calculated birth year from four US census records (1850-1880) vary from 1807 to 1815 (two are 1810). In contrast to these dates, her baptismal records show that she was baptized at St. Nicholas-at-Wade church in Thanet on May 6, 1810, with a recorded birth date of April 17.

In the Bible record she says she was born at Down Barton, a small manor house and farm less than a mile west of St. Nicholas-at-Wade. Her father James Homersham was a farm bailiff, so presumably the family was living at Down Barton at that time. Chatham, a town 30 miles west of Thanet that was stated as her birth place in her obituary, was clearly wrong.

She also notes in the family Bible that she and Thomas were married in Updown, a small village just south of Sandwich, Kent on October 12, 1830, by the Rev. Mr. Wadsworth. The church records show that Thomas and Ann were married in the small church at Ham (next to Updown) in 1831, not 1830.