Most of the articles here are about the Emptage men and it’s easy to forget just how much of a part their wives and daughters played in keeping their families going, especially in hard times.

And so, to redress the balance a little, I’m writing about my great grandmother, Caroline Jane and her sister Dorothy Walker Emptage. 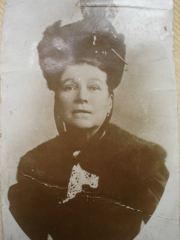 Caroline was born in 1843, the eldest surviving daughter of seven children born to Daniel Clark Emptage and Caroline (nee Goldsmith). The family lived in Ramsgate where Daniel was a fisherman and oyster seller.

Ramsgate was a fishing port and the Emptages were one of many families involved in the fishing industry and related trades, such as fish hawking and net making.

The fishing families lived in close proximity in crowded conditions in Ramsgate, marrying young and having large families. It was a difficult life for the wives of sailors and fishermen, living with the fear that one day their husband might not return from a sailing or fishing trip. Indeed, often the wives were widowed and left with young children to care for. Plus, in such conditions, the death rate of babies and young children was high, so many lost children was well as their husbands.

Newspaper reports of the day make fascinating reading, with reports of people getting into trouble, the high levels of drunkenness, appearances in the magistrates’ courts for fighting and arguing, failure to send their children to school and many other minor misdemeanours. However, temperance societies and other self-help associations also featured in the newspapers.

The lives of Caroline Jane and her sister Dorothy Walker Emptage illustrate the difficulties of life at those times but they were fortunate to have each other, to be able to support each other through their bereavements and hardships.


Caroline was nineteen years old when she married William Mynheer on 18 April 1862 in Christ Church, Ramsgate. Unlike Caroline, William was able to sign his name. He gave his address as 4 Rodney Place, as did Caroline, which implies that he was living with her family as a lodger. He was a sailor, from a family of mariners and coastguards in Harwich, Essex.

Their first child, Julia Elizabeth Mynheer was born in the late summer of 1862 in Ramsgate, so, like many women of that time, Caroline must have already been pregnant when they married.

Rose Agnes was born in the summer of 1866 and a year later Caroline’s mother died, aged just 46.

By the census of 2 April 1871, Caroline was 28, living at 35 Plains of Waterloo, with her three children (Julia, William and Rose). She was running a lodging house and her widowed but pregnant sister Dorothy was lodging with them. Caroline’s husband William was on board the Volunteer, off Lowestoft that night.

On census night in 1881, the family (Caroline and her children Rose, Daniel, Henry, Fred, Elijah) are living at 1 Belle Vue Road. Her husband William was on board the Britons’ Pride, a 37 tonne cutter, trawling in the North Sea, with four crew.

William had problems with drink. By 1881 they were coming to the attention of the authorities and were reported in the local newspaper, the Thanet Advertiser.

He was summoned for being drunk in the York Tavern in March 1881. Called by the landlord, Police Superintendent Buss said that he had found the defendant very drunk and struggling on the floor with another man. It was with some difficulty that he had persuaded William to go home. He added that the defendant made no use of bad language.

Caroline had to appear in court because William was at sea and would otherwise have lost six weeks work. The Police Superintendent was willing to accept this excuse and William was fined 2s 6d and 11s costs.

He was up in court again in June 1881 for drunkenness York Street. He had gone to the Admiral Harvey but they had refused to serve him. Supt Buss appeared again and said that William “often got drunk, and then his wife could get no money from him”. The Chairman advised William to take the pledge and he was fined 5 shillings and 10s costs.

Then in October 1881 was charged with and pleaded guilty to being drunk in the York Tavern. He was refused drink three times and Police Constable Standing had to eject him. William was fined 2s 6d and 10 shillings costs.

By 1882, according to Kelly’s Directory, William was living at and running a lodging house at 22, Artillery Road. William and Caroline continued to have more children with Annie Lavinia born on 17 March 1883.

But in 1883, William was twice in court for drunkenness. In January, Supt Buss, who appeared to know the family well, mentioned that William had some money left to him, so had an opportunity of bettering his position. When asked by the Chairman of the Magistrates if that was the case, William confirmed it but said that the money was leaving him as fast as he could get it.

The Chairman said it was shameful for the defendant to confess it; he seemed to get worse instead of better. There was now an air of exasperation from both magistrate and police officer. [Perhaps the money came from his father, who had died in 1882 but it seems that rather than using it to better himself, William merely used it to buy more drink.] On that occasion, William was fined 2 shillings and 6 pence and 10 shillings costs or 14 days imprisonment.

In February The Thanet Advertiser reported that William’s sister [sister in-law?] had attended court in William’s absence, saying that he had been called away on business on account of sickness that morning. The Bench issued a warrant for his arrest.

Two years later, Daisy was born in 1885. And Caroline was quarrelling with the neighbours; she was in court for using abusive words to Kate Stock and bound over in the sum of 40s to keep the peace for three months. Likewise, George Browning was bound over to keep the peace towards Caroline.

Six weeks later, William was again charged with having been found drunk on licensed premises but he pleaded not guilty. P.S. Petley said that he had seen the defendant go into the Admiral Harvey public house very drunk and had sent P.C. Wells after him. William had asked for beer but the barmaid refused to serve him.

William asked for time to pay the fine of 2s 6d and 11s costs but was refused and he was removed in custody, presumably to do 14 days hard labour. It didn’t stop him and the following year William was again summoned for drunkenness, this time at the Providence Tavern. He failed to attend and a warrant was issued to enforce his appearance. Evidently there was no shortage of pubs in Ramsgate.

By 1891, Caroline was working as a rope-maker and living at 131 King Street with her children Fred, Elijah, Annie and Daisy. William was lodging in Dover on census night and noted as single. He was no longer the master of the Britons’ Pride. (Had Caroline finally had enough and kicked him out? Or had he left of his own choice?)

William died off the Suffolk coast in January 1892 and was buried in Lowestoft Cemetery, aged fifty. There was no notice in the Kent newspapers.

In 1901 Caroline was living at 28, Adelaide Gardens, Ramsgate, with her son, Elijah and grandson, Charles Steele. Like many in that road, she was working as a lodging house keeper.

Her older daughters, Julia and Rose found work in London in service and married there. Annie married a local man and Caroline’s sons became mariners on fishing trawlers and married local girls.

By 1911, Caroline had moved to 26, Hibernia St and was living on her own. She was then sixty-eight years old. She’d had twelve children, four of whom died in infancy and childhood. She lived until the age of eighty-eight and died in October 1931, outliving two of her older sons (Daniel George and William Henry) as well as those who died in infancy.

In December 1866, when Caroline’s younger sister Dorothy was 19, she had an illegitimate child. She named him William Thomas Kingsford Emptage, after the father, who was just 17 and a sailor in the merchant navy. The couple didn’t marry and sadly the child died when he was just five months old, from pneumonia.

A few months later, on 1 September 1867, Dorothy married George Minter, also a sailor, at St Lawrence Church, Ramsgate. By the end of the month her mother Caroline, aged just 46, had died and was buried on 29 September 1867.

1867 had been a year of mixed blessings and Dorothy must have hoped for better things when her son George Philpott Minter was born in 1868 but unfortunately he died two years later and was buried on 7 December 1870.

Just eleven days later Dorothy’s husband George drowned at sea. He was on the Duchess of Beaufort, out of Teignmouth.

Dorothy was pregnant and, at the time of the 1871 census, was lodging with her sister Caroline, after whom she named her daughter, Caroline Agnes Minter, who was born in June 1871.

After several difficult and tragic years, by 1877 Dorothy had entered into a relationship with William Bateman, a sailor. They had nine children together, all of whom survived to adulthood. No marriage record has been found for Dorothy and William.

William died in January 1891, aged 35. Dorothy and William had been together at least fourteen years and once again she was left ‘widowed’ whilst pregnant.

In the 1891 census Dorothy was 43 and described as a [fishing] smack owner. By 1901 she was a fishing net canvas worker.

Dorothy died in 1909, aged 61. She’d had an illegitimate child (who died in infancy) by William Thomas Kingsford, two children by her husband George Minter (one of whom died in infancy) and nine children with her spouse or partner, William Bateman.

Thanet Advertiser and other newpapers