You are here: Home / Military and Maritime / Charles Frederick Emptage

Charles Frederick, known as Charley, was born in 1892, the son of Henry Thomas Emptage and Malbry Jane Wilson. You can read about Charley’s brothers Edward Lindsey and Walter Dansy here. 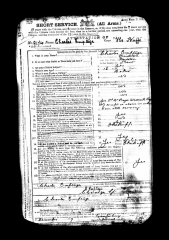 Charley, who was working as a baker, was just 16 years and 8 months of age when he enlisted into the 2nd Battalion East Kent (Buffs) Regiment in 1909, signing up for seven years with the Colours and five years in the reserves. Like so many men at that time who were eager to escape the poverty of their background, he lied about his age when signing up and the army listed him as 17 years and 7 months of age.

His enlistment papers show Charles to have been a slim built man standing just over 5 foot 4 inches and weighing 116 lbs with blue eyes and brown hair. He joined his new Regiment in Aldershot on 6 February 1909.

Charles, with the 3rd Battalion, remained in England from February 1909 until October 1911 when he was then sent to Singapore. He served there with his Regiment until the 31 January 1913 and was then sent to India and spent a further 288 days fighting outbreaks that were occuring in the Punjab at that time.

He returned to England on the 16 November 1914 and by the 17 of January 1915 Charley found himself with the British Expeditionary Force in Ypres, Belgium.

In April 1915 the Officer in charge of the Buffs Records wrote to Charles’ stepfather, Ernest Deamer informing him that no further official news had been received of Charles and asking Ernest whether he had received further news from any source.

Ernest replied: “Sir, I am sorry to say that I have not heard from my son since the 2nd of Feb and I cannot hear from anyone that has seen him since the 16th. I have had one letter returned and have enclosed the envelope. Yours obediently, E M Deamer.”

Charles’ body was never recovered and there is no headstone for him but the Commonwealth War Graves Commission records Private L/9174 C. Emptage’s death as 16 February 1915. 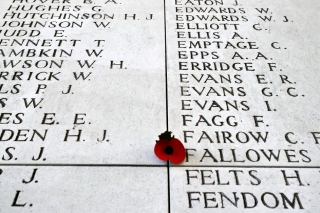 He is commemorated on Panel 12 and 14 of the Menin Gate Memorial in Ypres. The Menin Gate is situated on the east side of town and represents the road that the soldiers took going to the battle front.

Charles posthumously received the 14 – 15 Star, Victory and Defence Medals, which were sent to his mother. She received a total of £13 16s 2d in war gratuities after his death.

Edward was my father and Charley was my uncle.