You are here: Home / Military and Maritime / Edward Joseph Emptage

Edward was born in Margate, one of four children of John Edward Emptage, a carpenter, and mother Harriet Eliza Ashford. They lived at 29 Byron Road in Margate.

Born in 1891, by 1911, aged 19, Edward was working as a domestic footman in Chelsea. It is believed that between then and the outbreak of WW1, Edward worked as a steward on shipping lines. 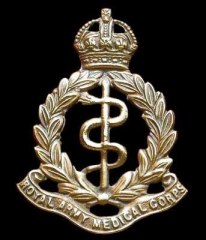 He enlisted as a private in the Royal Army Medical Corps on the 9th August 1914 when he was 23 years and 4 months old, he stood 6 feet in height. and gave his trade as Steward. He was transferred to the South Eastern Mounted Brigade Field Ambulance and progressed through the ranks reaching sergeant on the 4th December 1915.

The Field Ambulance was a mobile front line medical unit (not a vehicle) manned by troops of the Royal Army Medical Corps. Edward’s unit was sent to Gallipoli and his regiment was fighting from the 8th October 1915 until the 1st of February 1916. It is hard to imagine the horrors Edward saw. He would have been in the thick of it, retrieving fallen comrades, acting as a stretcher bearer and helping the wounded at dressing stations.

Edward survived, and finally embarked on the “Caledonia” for Egypt. The Caledonia was requisitioned as a Troopship in 1914 but by the end of 1916 it had been sunk by an enemy submarine off the coast of Malta.

In August 1916 Edward was attached to the 1/1 Suffolk Yeomanry, and then later re rejoined his unit on the 1st August 1917. He suffered from a relapsing fever, possibly malaria, and on the 25th May he embarked to Alexandria on the “Indarra” bound for Marseilles. From there he went to Rouen and was active in the field until transferred back to England on the 16th of January 1919 for demobilization.

In Augut 1918 Edward married Lilian Alice Webb, the mother of his son Frederick who was born in 1916. They had two more children. Edward died in 1930, aged just 39. Lilian never remarried and survived him by 34 years.