Albert John was a boatman and lifeboatman and no doubt young George would have followed his father down to Margate beach and helped him with his pleasure boat on which Albert took visitors out for a sail around Margate bay. However, he would have known that the sea did not just provide pleasure trips for holidaymakers but could be a highly dangerous environment as he witnessed the times that the lifeboatmen were called out to ships in distress in stormy seas.

In 1891, when he was 15, George was working as a boot boy at Grongar House School in Margate. One of his colleagues was Frances Annie Fagg, a domestic servant aged 17 (who left her job in Margate and married Frederick Fredericks in London in 1894).

Later in 1891, George and a Thomas Allman were fined 10 shillings plus costs for poaching on land owned by a Henry Brookes of Wilmington. Both young men pleaded that they had been given permission by a Mr Whitehead who was the occupier of the adjoining land.

So it is not surprising that, on his 18th birthday, George William Emptage enlisted at the Royal Navy base at Chatham for 12 years. His service record describes George as 5 feet 6 inches in height with hazel eyes and brown hair.

At the time of the 1901 census, 31 March, George was listed as an Able Bodied Seaman aboard the HMS Repulse moored at Gibralter. He was single, aged 25.

The ships and the dates on which George served in them, between 1891 and 1905, are noted below.

By 1906, George had served his 12 years in the Royal Navy though he remained in the Naval Reserve. He became a postman for the General Post Office in Margate and was a keen amateur footballer, playing for the Postal Football Club.

He also became a lifeboatman, alongside his father Albert and brother Frederick.

Frances and George had both worked at the Grongar House School in Margate but Frances had moved to London and married Frederick Fredericks in 1894. Sadly she was widowed in 1901. Having had a son die in 1897 aged 31 months, and been left with a daughter who had been been born in 1899, it seems Frances moved back to Margate to be near her family and so met up with George again.

On the 12 January 1909, George and Frances became parents, welcoming a son, George William. By 1911 they were living at 65, Byron Road (now Avenue), Margate, together with George’s stepdaughter Winifred Mary, whose surname was noted as Emptage. Later that year, their daughter Alice Rose was born 21 August 1911.

War was declared with Germany on Tuesday 4 August 1914 and reservists were called up but his service record shows that George William, then aged 39, had joined HMS Hogue on 2 August 1914.

On the day that war was declared, George wrote to his wife:

HMS Hogue 1914.
My dear Frances,
After wondering this afternoon, war will be declared with Germany at midnight tonight, I also went and made out 2 pounds 10 shillings for you to receive on the 1st August.
I thought it the best way, after all we are leaving here tomorrow, Wednesday for an unknown destination, so I do not know when I shall have another chance should anything happen, as it is my earnest wish that George is to have my watch and chain, also my medal.
The remainder of my property, clubs and everything else, I leave to you to do what you like with.
We are fully prepared for anything now, so what will happen I don’t know. Once again I say look after the children, and kiss mum, all for me hoping and trusting that I shall see you all again is my earnest wish, so goodbye for the present.
Hoping that you are all well, I close and remain your loving husband.
George W. Emptage.
P.S. I sent you 10 shillings on Tuesday night, hope you will get it alright.
Goodnight and God bless you all.”


George had also sent a postcard to Frances:

Mrs Emptage
65, Byron Road, Margate, Kent.
My dear Frances,
The parcel has arrived quite safe and many thanks for the same as we are not here for long.
I have posted a letter for you and will write again, also if I get a chance have received your letter, also several papers and many thanks for the same, so now I must close, with love to the children, accept the same yourself.
I remain your loving husband George.” 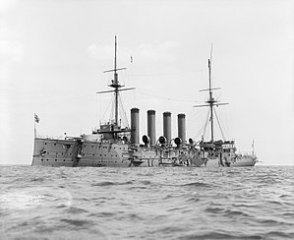 HMS Hogue and her sister ships, Aboukir and Cressy were Cressy class armoured cruisers, tasked with patrolling the North Sea in support of the destroyers and submarines which were based at Harwich and which protected the eastern end of the English Channel from German warships which were attempting to disrupt the supply route between England and France.

However, on the morning of 22 September 1914, the destroyers had been forced to seek shelter from bad weather and the three ships were on their own, sailing line abreast about 2,000 yards apart. They were not expecting submarine attacks but had lookouts posted and had one gun manned on each side to attack any submarines which were sighted.

The German submarine U-9 had been ordered to attack British transports at Ostend but had been forced to dive and take shelter from the storm. When it surfaced she spotted the British ships and moved in to attack, firing a torpedo at Aboukir.

Thinking that the ship had struck a mine, the other two ships moved in closer to rescue the crew. Hogue had stopped and lowered her all her boats when she was struck by two torpedoes. The cruiser’s watertight doors had been open and the ship capsized within ten minutes.

Posthumously, he was awarded the 1914 Star, Victory and British war medals. 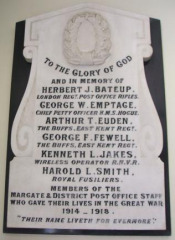 George William Emptage is commemorated on the Chatham Naval Memorial, and the Margate War Memorial and he is listed on our In Memoriam page.

The Margate and District Post Office Staff War Memorial hangs in the main post office in Margate. It lists those staff members who gave their lives in the Great War, 1914 -1918. “Their name liveth for evermore.”

After the death of her husband, Frances never remarried and lived out her life at the family home of 65, Byron Road, Margate.

Frances passed away on the 23 August 1960 at Hill House Hospital, Minster in Thanet, Kent, age 87 and was buried at Margate Cemetery, Manston Road, alongside her sister, Lavinia Link who died in 1952 age 84.

George’s letter and postcard are held by the Historic Dockyard Chatham and were copied, with permission, for a WW1 exhibition. They were discovered by Team Emptage member Tessa Towner.