Born 28 October 1884 in Milton, near Sittingbourne, Kent, George was the first of four children of George Emptage and his wife Charlotte Victoria Stone. Though Charlotte was referred to as George’s wife, they didn’t marry until 1892, after the birth of all four children.

His father George was born in Minster, Isle of Sheppey, the son of Henry Stephen Graham Emptage and his wife Jane Ferrell.

In 1891 and 1901 the family were living in Chalkwell Road, Milton, Kent. George senior was a mariner and, in 1901 George was 16 and, unusually for then, no occupation was noted.

By 1911, just George remained at home with his parents. He was 26, noted as a general labourer. 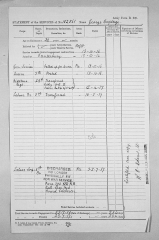 George was 32 when he was called up for service, 5ft 8 inches in height and a brickfield labourer.

George’s character was noted as “good” but by the middle of July 1917 he was a patient at the Military Hospital in Colchester and a formal medical report was completed under the “review of exceptions”.

George was classified with “Imbecility (congenital)”, with his disability being from birth and the opinion expressed was that it was caused through heredity, not by any active service, climate or ordinary military service.

In answer to the question “What is his present condition?”, the medical officer wrote

Memory very deficient, cannot answer any of the questions left blank in this form. Sits all day doing nothing. Has never been able to earn his living, was always kept by his mother. Never in over a months observation has he had the initiative to speak to anyone.”

The recommendation was that George be discharged as permanently unfit though his discharge papers say that he was “no longer physically fit for War Service”. He was discharged on the 23rd July 1917.

At the time of George’s enlistment in October 1916, he had signed his enlistment form. It was a bit rough but was clearly a full signature. The ‘Medical History form for recruits enlisting direct in to the Regular Army’, has, against the assessment of George’s vision, the word ‘illiterate’. The’ Medical Report on the Invalid’, dated 13 June 1917 says that George “writes just 2 letters only of his name”.

By his discharge on 23/7/17, when George signed the Transfer Statement of Clothing and Necessaries, he was unable to write his name and signed with an “X, His mark”, which was duly witnessed. Clearly, in the 284 days of George’s service, his condition had severely deteriorated. 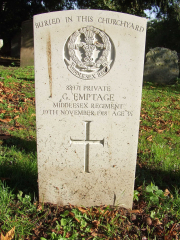 George returned to his home at Lavers Cottages, Milton, but sadly towards the end of 1918 he contracted influenza and double pneumonia and died at the Workhouse Infirmary at Milton Regis on the 19th November 1918. He was buried at Holy Trinity Church, Milton with a War Graves headstone.

Even though he never fired a shot in anger and never went abroad, his name deserves to be honoured amongst all the other men who served throughout the Great War.

George may have been classed as an “Imbecile” by the army but it is important to put that word in to the context of 1917 rather than present day. In today’s more enlightened society, we can help people who may have learning difficulties or slowness in their demeanour, without the need to call them an “Imbecile”.

It is not at all clear that George suffered from an inherited condition but it is clear that he should never have enlisted, or rather, never have been conscripted.

By 1916 the initial rush of men volunteering to join the service in World War One was over and conscription was introduced, with single men aged 18 – 40 who were not in essential war work being the first to be called up. There were Military Service Tribunals which could adjudicate upon claims for exemption, including for health conditions. Perhaps George’s family did not know how he could apply to the Tribunal or felt there was a stigma in doing so.

However, given his condition, we must ask ourselves why George was accepted by the enlistment personnel. Perhaps the army was so desperate for men by then that they turned a blind eye to it, until it became evident that George could not function in the army.

We know now that George’s great niece (who I have not spoken with and so do not have permission to use her name) has, for several years disputed George’s classification as Imbecility (congenital) from birth through heredity and do not want to cause her more distress but feel we should be fair in pointing out that George may have inherited the condition through his paternal family.

Elizabeth Emptage (1836 – 1916) the sister of George’s paternal grandfather, was noted on the 1871 census as an imbecile. This was the first census on which that option was given. On the 1881 census she is referred to as partly imbecile. On the 1901 census, aged 66, following the death of her father, with whom she had been living for many years as a single woman, Elizabeth, then a pauper, was in the Milton Union Workhouse. The column for deaf and dumb, blind, lunatic, imbecile or feeblemindedness was ticked. She was still in the workhouse in 1911 though there was no tick in the end column, which was then named infirmity. Elizabeth died in the workhouse in 1916.

On three consecutive censuses covering 20 years she was referred to as an imbecile, partly imbecile or her name ticked in that end column so it is quite possible that George was indeed suffering from inherited imbecility (congenital). This did not form part of our original article as we were writing about George, primarily about his war service.

We also know that George’s great niece believes that the medical officer’s statement, quoted in the article, that George “Has never been able to earn his living, was always kept by his mother” was incorrect. Evidently, we have no idea on what the medical officers based that statement but, before we quoted that passage from George’s records, we had referred to the 1911 census which said that George was 26 and a general labourer and to his enlistment form in 1916 which clearly states that he was a brickfield labourer.

We think that George’s great niece was also concerned about the fact that, in our original article, we wrote: “George William, 5ft 8 inches in height, was a bricklayer’s labourer who had never learnt to write and signed his name with an “X” when enlisting.”

Therefore I investigated George’s army records and found that we had made an error and have corrected the article. It now reads:

“At the time of George’s enlistment in October 1916, he had signed his enlistment form. It was a bit rough but was clearly a full signature. The ‘Medical History form for recruits enlisting direct in to the Regular Army’, has, against the assessment of George’s vision, the word ‘illiterate’. The’ Medical Report on the Invalid’, dated 13 June 1917 says that George “writes just 2 letters only of his name”.

By his discharge on 23/7/17, when George signed the Transfer Statement of Clothing and Necessaries, he was unable to write his name and signed with an “X, His mark”, which was duly witnessed. Clearly, in the 284 days of George’s service, his condition had severely deteriorated.”

It seems that David Emptage, when writing the article, was faced with several pages of George’s army records and missed his signature on the enlistment form, focusing more on the reference to George being illiterate and on one of George’s discharge forms which clearly shows that he could not sign it other than with an X.

It was a simple mistake, with no intention to mislead the reader. I sincerely apologise to George’s relatives for any distress which our mistake has caused them.

Our article is now correct in all the details which we have taken from the social records (births, marriages and censuses) and George’s army records. Our policy is clear, we cannot change those records, we can only report what they say.

But I understand George’s great niece’s desire to ensure that the record on George is correct and that she may have relevant information passed through the family.

And so, in the interests of balance, on 30 March 2021, I emailed the great niece and invited her to contact me with her concerns. And I am willing to give her the opportunity to express them in a republished article.