John Emptage of Watling Street in the City of London, Joyner and Cabinetmaker, first came to my attention in the City of London Sessions Papers dated 10 October 17371, which provided a fantastic insight into a family that could not only be traced in London and Kent, but also the West Indies and India.

These days, grandparents don’t have an automatic right to contact with their grandchildren. However, in 1737, a petition and appeal by the Churchwardens and Overseers of the Poor of the Parish of Deal, Kent to the Rt. Honorable Sir John Thompson Knight, Lord Mayor of the City of London and the Rest of his Majesties Justices of the Peace for the City of London in their General Quarter Sessions of the Peace, requested that John Emptage pay the relief and maintenance at his own cost for his grandchildren.

‘Humphry Emptage, Son of John Emptage, of Watling Street in the City of London Joyner & Cabinet maker is run away & left his wife & four Children (Vizt. John, Humphry, Thomas & Mary) a Charge & bur then to the said Parish. That your Petitioners After many enquiries after the said Humphry have not yet been able to find him nor do they know where he is. That the said Wife & four Children still continue on Charge & burthen to the said Parish.

Your Petitioners therefore most humbly pray that your Lordship & Worships will be pleased to Assess the sd John Emptage, the Grandfather of the sd Jno. aged Eleven years Humphry aged five years Thomas aged two years & Mary Emptage, Aged Eight years the lawfull Children of the said Humphry Emptage, his son in such sum or sums of money as to this Court shall seem meet

And Your Petrs. shall ever pay Etc
London.”

In another petition, it is clear that the Parish of Deal continued to provide for Sarah, as she now has 5 children. The Church Wardens and Overseers of the Poor of Deale explained that the Parish had provided for Sarah Emptage, (the wife of Humphry Emptage) and her 5 children for the last 3 months.2

That Mr. John Emptage of Watling Street In the parish of Saint Mary Aldermary London Joyner and Cabinet maker, father of the Said Humphry Emptage being a person of Sufficient Ability to releive and maintain at his own Cost and Charges his Said five Grand Children’.

Gabriel Drayson, Agent for the petrs.

‘Your Petitioners therefore Humbly Pray your Lordship and Worships that You will be pleased to Assess the Said John Emptage, the Grandfather in Such Manner and According to Such Rate as to Your Lordship and Worships Shall Seem meet for the Releif and maintenance of his Said Grand Children or that You will be pleased to Order him to Attend this Court at a Certain Day to be Appointed to Show Cause Why He Should not be Assessed in Ease of Your Petitioners.”

William Wallis, a citizen and haberdasher of London, swore that he had known John Emptage, Joyner and Cabinet maker now Living in Watling Street in the parish of Saint Mary Aldermary London for several years and that during that time was:

a ‘House Keeper and hath been taken and esteemed by the Neighbourhood to be a Person in Good Circumstances and of Sufficient Ability and has the Character of a man of Worth and Fortune this Deponent having within this few Days made a Strict Inquiry in the Neighbourhood about the Same’.
Sworn at Vintners Hall London Citizen & Haberdasher of London before Jno Thompson Mayr. 1736-7

John Emptage, was the son of Humphrey Emptage and Mary (Fell), who married on the 30 November 1675 at the Devonshire House Society of Friends3, without Bishopsgate, London. The register of marriages4 states that Humphrey Emptage was of Sholden, Kent, (near Deal) and a Maltster. Four of Humphrey and Mary Emptage’s children died in infancy and were buried at the Friends Burial Grounds in Deal, Kent.5 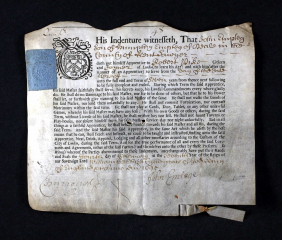 Whilst John’s baptism is still to be discovered, his indenture as an apprentice to Robert Pike6, Citizen and Joyner of London dated 4 February 1695, confirms the connection ‘John Emtag, son of Humphry Emtag of Deale’, Kent7 – it is signed John Emtage. 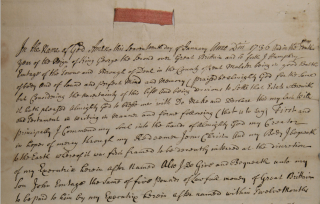 A marriage bond for John Emtage of the parish of St Mary Matfelon, Whitechapel and the marriage registers of All Hallows, London Wall evidence the marriage of John to Mary Stammers on the 27 February 1702/03.

John and Mary had at least five children, however, Mary died in childbirth on 11 December 1713, and was buried near School House Lane, Whitechapel9. According to the records, she appears to have twins Mary (died 18 Jun 1714, buried near Wapping Old Stairs) and William (died 6 July 1714, buried near Wapping Old Stairs). As well as Mary and William, John and Mary had another 3 sons – John Emptage born c1705 in Whitechapel, Humphrey Emptage born c1707 and Thomas Emptage – a bit of a mystery, but mentioned in Mary Chambers’ will and his father’s will.

Humphrey born c1707, cabinetmaker, as we know from the Sessions Papers, married Sarah King on 23 November 1724, in Fleet Prison Chapel, both of St Giles, Cripplegate. 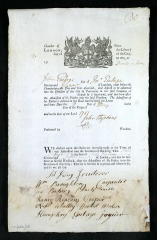 John Emptage, senior was granted the Freedom of the City of London on the 11 May 170311 in the company of Joyners. Both sons – John and Humphry were also granted the Freedom of City of London12. In the Register of duties paid for apprentices’ indentures dated Tuesday 16 November 1731, John Emptage, citizen and Joyner, is Master to Edward, son of William Webster of Leicester Fields.

John Emptage died in April 1755 and was buried on the 17 April 1755 at St Gregory by St Paul13, a parish that was united with that of St Mary Magdalen, Old Fish Street in the Castle Baynard ward in the City of London.

In his Will dated 18 April 1753, John Emtage, Citizen and Joyner of London appointed his two sons Humphry and Thomas executors if alive. In summary, he requested:

Decent burial and to discharge debts.
Residue to be divided amongst them.
As to the estate I hold from the Bishop of Winchester and now 8 1/2 years to the expiration of the lease I give this to my son Humphry he paying out of the profit thereof to my grand-daughter Sarah Emtage, my son John Emtage’s child, £5 per annum till the expiry of the lease. To my daughter Sarah, my son John’s wife all that blew bed and furniture in the two pair of stair rooms with the bed stead and bed bolster and all that is on the bedstead.

Probate 23 April 175514, to Humphry Emtage, son of the deceased, with power reserved to the other executor.

When studying John’s will, I can’t help wondering whether he had got the wives of his sons muddled up. They both had daughters called Sarah, but Humphrey married Sarah King, whereas John married Elizabeth King, so who got the ‘bed stead and bed bolster and all that is on the bedstead’!

So where did Humphrey Emptage disappear to….? 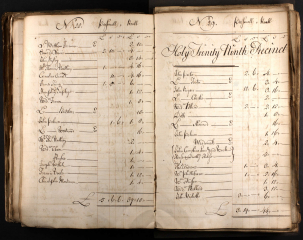 Well your guess is as good as mine, but he did turn up again and Sarah took him back. In 1741, Humphrey and Sarah had a daughter Sarah, who was baptised on 26 April 1741 at Holy Trinity the Less, London and another daughter, Elizabeth, was born 12 March 1745 and was baptised on 3 April 1745 at St Giles Cripplegate. In addition he appears in the land tax records for Queenhithe in 1743/44/45.

What is strange though, is Humphrey and Sarah’s son, Thomas born in 1735 and mentioned in the Sessions Papers, was baptised on 9 April 1735 at St Swithin’s, Lincoln, Lincolnshire – some 153 miles from St Giles, Cripplegate, and in today’s world, three hours driving up the M11 and A1.

Further research into John and his sons is required, especially in relation to their births/baptisms, which have been problematic. However, the use of other sources, such as Sessions papers, Quaker records, wills, Freedom of the City of London and indentures/apprenticeship records and land tax records has supported the pulling together of the threads of this family. Next stop – the Library of the Society of Friends to better understand the Quaker records available.


An oil painted panel of the Master, Wardens and Court receiving the plans of their new Hall in 1670. 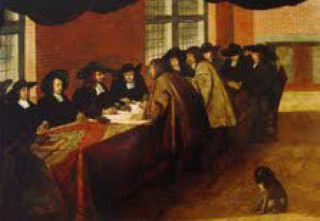 This picture depicts the Joiners Court of Assistants viewing the new plans, is reputed to be by Cornelius Jackson. It is said to represent several persons of the Company sitting at a long table in their Livery Gowns and Mr Whiting (Master of the Company 1677) and his man laying a model before them of the Hall, or some rooms in it, with some of the Assistants viewing and considering it.

The painting hung in the Joiners Hall on the Chimney Piece of the Hall in 1720. The date of the painting not known but as Thos Whiting was Master in 1677-8, it was probably painted in the latter part of the 17th century.

3. Society of Friends, Devonshire House Monthly Meeting, Bishopsgate. Established 1667 as a constituent meeting of London and Middlesex Quarterly Meeting. The Bull and Mouth was lost in the Great Fire. Before it was rebuilt Friends took a lease on a house on Bishopsgate owned by the Earl of Devonshire.

4. Register of Marriages belonging to the Monthly Meeting in Wheeler Street by Spitalfields, London from 1666 to 1707

6. Also mentioned in the Annals of the Worshipful Company of Joiners of the City of London by Henry Laverock Phillips, 1915 – 1714/15 Robert Pike signed an affirmation for Upper Warden.

10. Registers of Clandestine Marriages and of Baptisms in the Fleet Prison, King’s Bench Prison, the Mint and the May Fair Chapel. Records of the General Register Office, Government Social Survey Department, and Office of Population Censuses and Surveys, Registrar General (RG) series 7. The National Archives, Kew, England.