You are here: Home / Events / Thomas Emptage the Younger versus The Navy Board

Imagine being owed a significant amount of money (let’s say £34,000) by the Royal Navy today, having to write letters to request your money and then only being paid part of your original back pay, leaving you with yet another shortfall. In today’s world, you might eventually resort to social media or the popular press to highlight the injustice of the situation you have found yourself in.

However, back in 1744/1745 Thomas Emptage, Master of the Mayflower, a Folkestone Cutter, out of Deal, Kent, had no such recourse and died being owed £400 – ‘Due and owing to the deceased from the Honorable Commissioners of the Navy for ten months pay forfeit trades in his Majesty’s Service.’ 1

Thomas and Mary had 6 children – 3 of whom were baptised Thomas, but all died in infancy, leaving Elizabeth (1733 to 1825), who married Thomas Marsh on 7th Nov 1757, Jeffery Emptage baptised 1735, and Hezekiah Emptage baptised 1738. All three children are mentioned in the will of Mary Emptage3 of Folkestone.

To set the context of why Thomas Emptage was in the employ of the Navy Board, understanding what was happening off the Kent coast and in Europe at that time is key.

In Europe, the War of the Austrian Succession (1740-1748), was in full-swing and in 1743/1744, a planned invasion of England was to be undertaken by the French, shortly after the declaration of war between the two countries. The French planned to land at Maldon in Essex and a squadron under the Admiral Comte de Roquefeuil4, would sail from Brest, whilst ensuring that the channel between Dunkirk and the English coast was clear of the British fleet. A message would then be sent to Marshal Saxe’s5 invasion force at Dunkirk, informing them that the crossing was feasible.

The ‘Young Pretender’ Prince Charles Edward Stuart, grandson of James II, had come to Gravelines6 from Italy to join the expedition and assert his claim to the British throne. However, British agents in Rome and Paris got word of these preparations, and steps were taken to prepare. Of the 10,000 active troops in Britain, 7,000 were deployed to defend London and South East England. 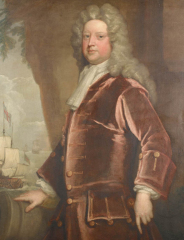 The squadron under Roquefeuil sailed from Brest with twenty sail in February 1743/17447. Roquefeuil succeeded in making his rendezvous and embarked most of Saxe’s army across the open Dunkirk beaches. However, the French had made a mistake, believing that Norris’ 8 larger British fleet was in Portsmouth, when actually it was sitting off The Downs9. On February 24th, Norris arrived off Dunkirk with twenty five sail of the line. However before Norris could attack, the tide turned, and in the late evening, with Roquefeuil deciding to take flight, the French fleet began to drift down the Channel on the ebb tide, but a violent storm suddenly descended. Twelve French transport ships were sunk, seven of which went down with all hands lost. The others were severely damaged and forced to limp back into Dunkirk. A week later, the main French fleet arrived in Brest severely battered by the storms.10 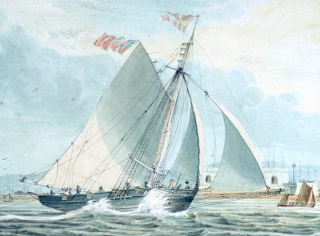 In April 1744, on the direction of the Navy Board, Folkestone cutters11 were hired for use as tenders to support Sir John Norris’ in search of the French fleet. This included the Mayflower – a Folkestone cutter, partly owned by James Clarke and Thomas Emptage.

Thomas Corbett in a letter to the Navy Board12 dated 7th May 1744, highlighted that the owners of Folkestone Cutters, John Hunt, Master of the Two Brothers, Hezekiah Godden13 of the Ranger, John Hague of John and Suzanna and James Clarke of the Mayflower, have petitioned for compensation for expenses involved in carrying out the orders of Sir John Norris in search of the French Fleet. A proper contract was not drawn up and recommends that the claims are accepted and the men reimbursed. 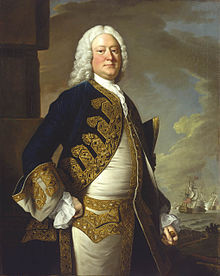 Mr Lancelot Burton at Deal in a letter to Thomas Corbett, dated 10 September 174414 reports on how long the four Folkestone Cutters, hired for Captain Byng15 of the Winchester, have been hired, how many oars they have and whether they can be converted to take more. The Mayflower cutter, James Clarke, Master, came into the Downes on 7th and will be sent to Captain Byng unless other orders are received.

However, in another letter to Thomas Corbett16 dated 11th September 1744, Mr Burton highlights that he has received a complaint from Captain Byng at Dunkirk about the usefulness of the cutters sent to him. John Pysing, Master of one of the cutters, has gone to get his guns from Dover and Stephen Godden, Master of the Union cutter arrived at the Downs on the 9th and is now on pay, despite not having his guns. Mr Burton opines no more cutters should be sent to Captain Byng in view of his complaints.

In a further letter to Thomas Corbett dated 21 September 174417, Lancelot Burton advises Captain Byng has discharged the John and Richard and the Mayflower cutters. Thomas Corbett on the 5th October 17443 stated the rates under which the cutters John and Richard and Mayflower, recently released by Captain Byng of the Winchester, served, was £40 a month.

In a letter to the Navy Board (20th January 1744/45)19, Lancelot Burton outlines the state of the agreement with each of the Masters of the Folkestone Cutters, providing an account of when the cutters were taken into service and what they have been paid.

‘Having been employed in his Majesty’s Service at Deal in the Mayflower, Folkestone cutter 12 months and have received but two months pay; and my vessel now wanting some materials. I humbly beg your Honours will be pleased to consider my case and being obliged to pay my people every month which has put me to great difficulty to pressure money and order me to be paid six months pay that I may fit my vessel in a proper maner…’

Reading between the lines, whoever wrote the request for Thomas probably suggested that he didn’t have a ‘hope in hell’ of getting 10 month’s pay and to go for 6 months. In the end, the Navy Board only agreed to pay him 4 months money.

Honorable Sirs,
Having been employed at Ostend during the siege there and lost our anchors split our sailes to pieces; and being at a great expence for victualing our vessels and mens wages, and not being able to pay them. I humble beg your honours will be pleased to order us to be pay’d six months pay each. To enable us to repair our vessels and make them for any service they shall be wanted for; and am….
Honorable Sirs
your most obedient humble servants
Thomas Emptage
James Clark
Deal 22 August 1745

‘Direct Mr Burton to pay them four months of the pay due to them and take their receipts for the same in Orders to its being allowed on paying his accounts.’

In a letter dated 9th December 1745, Deal, petitioned the Navy Board for eleven months pay for Thomas Emptage23,

‘ your petitioner has been employed on his vessel in the service of the Clerk of the Cheque1 at Deal, attending on the Men of War there, for a considerable time last past; during which service your petitioner has had considerable loss and dames of anchors cables, sails rigging and belonging to his vessel, and has also been at a great expence in victualling and manning his vessel and owes great sums of money in consequence thereof, and there being now eleven months pay due to your Petitioner for his said service…..’

Thomas Emptage stated that he would take 6 months pay to discharge his debts, which the Navy Board agreed to pay on the 10th December 1745.

Thomas was buried on the 7th January 1745 (1745/1746) at SS Mary & Eanswith Church, Folkestone, Kent aged 37 years. Burial registers usually do not give a reason for why a person died, but perhaps something we would recognise today as stress over non-payment of monies, could have contributed to his death at such a young age. 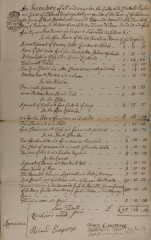 The inventory of Thomas Emptage the younger taken on the 20th January 1745/46, highlights that as well as a kitchen with two small coppers, some old beer barrels and tubs and cellar, there was a fore room, a fore chamber, with one feather bed and a back chamber, with two feather beds. Whilst in the garret, aligned to his trade, was apparel of herring and mackerel nets, valued £4:10:00, seven pounds of rope, valued £3:10:00, the deceased wearing apparel and ready moneys £8:00:00.

In addition, the inventory states – one fourth part of a trader whereof he was the late master, valued £40:00:00, as well as ‘due and owing to the deceased from the Honorable Commissioners of the Navy for ten months pay forfeit trades in his Majesty’s Service’, valued £400:00:00.

6 Gravelines – a commune in Northern France, 15 miles southwest of Dunkirk

7 The Age of Battles: The Quest for Decisive Warfare from Breitenfeld to Waterloo. By Russell F. Weigley 2004

9 The Downs – a roadstead or area of sea in the southern North Sea near the English Channel off the east Kent coast, between the North and the South Foreland in southern England. In the age of sail, the Downs served as a permanent base for warships patrolling the North Sea and a gathering point for refitted or newly built ships coming out of Chatham Dockyard, and formed a safe anchorage during heavy weather, protected on the east by the Goodwin Sands and on the north and west by the coast.

11 Cutter – a one-masted vessel rigged with a gaff mainsail, topsail, headsails and usually a square topsail. The name is derived from their fast sailing. One of the key roles of the cutter was to act as a scout and advice boat for the battle fleet and detached squadrons – British Warships in the Age of Sail 1714-1792 Design, construction, Careers and Fates by Rif Winfield 2007.

13 Brother in law of Thomas Emptage

24 The senior officers of a victualling yard were the agent victualler (in larger establishments only), the storekeeper or naval officer, and the clerk of the cheque. The victualling yards reported to a victualling Board, which in turn reported to the Navy Board. Clerk of the Cheque: mustered the workmen, looked after expenses and kept accounts of earnings. National Archives.gov.uk and National Maritime Museum

The image of the cutter is taken from a painting of a cutter beating to windward outside Portsmouth harbour, inscribed to Lieut Hopkins