You are here: Home / People / Was James the longest living Emptage?

When the average life span for an adult male born in the early 1800s was not much above 50 years, James Robert Emptage defied all the odds and lived to be 101.

Was his great age attributable to his genes or to something else? 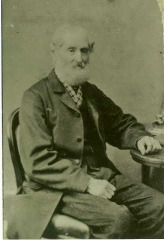 Certainly his father Stephen had lived to be 92, and his grandfather John had lived to a credible age of 84. Whilst James probably had a better than average chance of living a long life there is nothing to indicate that he would also live quite a remarkable life.

Stephen Emptage and Phoebe Williams were married in Prittlewell, Essex in January 1813. They had seven children. James Robert was the 5th, baptised at the Holy Trinity Church, Queenborough, Sheppey, on the 17th March 1822.

By 1841 the family had moved from the Isle of Sheppey to Mount Pleasant, Plumstead, in Kent, (now south east London) and Stephen was working as a milkman and cowkeeper. This occupation was to influence young James Robert and remained with him throughout his working life.

James Robert was 19 years old when his mother, Phoebe Emptage passed away on the 26th August 1841 age 45 and was buried at Woolwich Union Chapel, Woolwich.

On 21st November 1844, James Robert, a bachelor aged 22, married Jane Lewis, a spinster aged 23, at St John the Evangelist Church, Lambeth, London. His and his father’s occupation was given as cow keeper.

By 1851 James, aged 29, had become a self employed dairyman. He, Jane and their family were living at 23, Henry Street, Woolwich, London.

In 1861 James Robert Emptage was still living at 9, Bowling Green Row. All his surviving children were with him. They had a live-in domestic servant, Sarah Macey.

29 months after his wife Jane died, James Robert married Sarah Macey, in April 1862 at St John the Evangelist Church, Lambeth. James was described as a dairyman and his father Stephen as a gentleman.

James was then aged 40 and Sarah was 20. Such age differences weren’t unusual during the Victorian era.

Sarah, who had worked as a domestic servant for James, came from a humble background, with her father William working as a labourer and living at Exmouth Place, Tower Hamlets in London. So marrying James ensured security for her. James gained a mother to his still young children.

So, between 1846 and 1883, James Robert had seven children by his first wife, Jane, and ten by his second wife Sarah. His last child, Lavinia, was born when James was 61.

Becoming self employed had been the start of a profitable era for James Robert and his family though not everything went smoothly.

In 1866, James purchased some cattle in London which had been imported from Holland. But it was found that they suffered from rinderpest although they showed no symptoms when purchased. Rinderpest, known as cattle plague, was an infectious viral disease which had, until then, been considered to have left the Woolwich district entirely. Seven of the cows were condemned by an inspector and had to be killed and buried, costing James a lot of money. The headline in the Cork Constitution on 9 April 1866 was “Cattle Plague at Woolwich”.

Notwithstanding this set back, James continued to make a good living selling cattle and milk and he started to look around with an eye on buying nearby properties.

Over the next few years, James purchased properties at Prospect Place in Plumstead and rented them out. By 1872 James also owned two properties in Glenavon Street. The records for 1900 show that James was paying land tax on numbers 1- 6 Prospect Place, Woolwich.

James Robert was one of the jury men at the inquest into the sinking of the SS Princess Alice in 1878.

The SS Princess Alice was a pleasure steamer which carried people from London Bridge down river to Sheerness, Sheppey, and back, stopping at various places along the way.

On the 3 September 1878 it was in collision with a collier, the Bywell Castle on the River Thames, just downstream from Woolwich. The collier was a far bigger vessel than the Princess Alice. 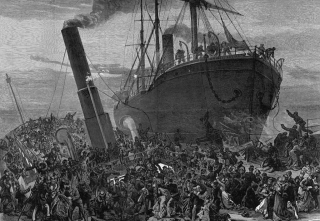 The Princess Alice was on the return journey, an hour after sunset. She was on the wrong sailing line and was rammed by the collier. The pleasure boat broke into three parts and sank quickly, her passengers and crew drowning in heavily polluted waters where 75 million imperial gallons of London’s raw sewage had just been released.

Her captain, William Grinstead, was one of those who was killed and so could not explain why the boat had been off its sailing line. However, he had allowed his helmsman to stay at Gravesend when the boat stopped there and had replaced him with a passenger, a seaman, who had little experience of the Thames or of helming such a craft as the Princess Alice.

Though many people were rescued by the crew of the collier Bywell Castle, a passing steamer and several boats which put out from the shore, between 600 and 700 people died, all from Princess Alice, the greatest loss of life of any British inland waterway shipping accident. No passenger list or headcount had been made, so the exact figure of those who died has never been known. 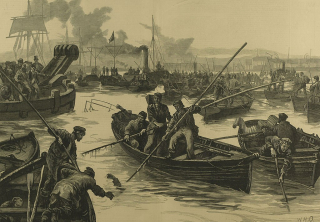 Bodies were pulled from the water by those in the small boats and others were washed up on both sides of the River Thames.

The next day Charles Carrter, the coroner for West Kent, opened an inquest for his region. He took the jury to view the corpses at Woolwich Town Hall and Woolwich Pier. There were more bodies on the northern bank, but this lay outside his jurisdiction.

Charles Lewis, the coroner for South Essex, visited the Board of Trade and the Home Office to try to have the remains in his jurisdiction moved to Woolwich to allow one inquest that could cover all the victims and hear the evidence in only one location, but the law meant that the deceased could not be moved until the inquest had been opened and adjourned. Instead, he opened his inquest to formally identify the bodies under his authority, then adjourned proceedings until after Cartter’s case had come to a conclusion. He issued burial orders, and the remains were then transferred to Woolwich. The bodies were buried in Woolwich Cemetery.

In the aftermath of the sinking, changes were made to the release and treatment of sewage, and it was transported to, and released into, the sea. The Marine Police Force, the branch of the Metropolitan Police that had responsibility for policing the Thames, were provided with steam launches after the rowing boats used up to that point had proved insufficient.

To sit on the jury in such an inquest must have been a harrowing experience for James Robert and the other jury members, especially viewing so many bodies which were in a terrible state from their immersion in the foul water.

On both the 1881 and 1891 censuses James Robert described himself as a retired dairyman. There was no mention of his property business.

In 1891, when James Robert was 69 and Sarah was 49, they had 10 children living with them, at 11 Bowling Green Row. Frederick from his first marriage, who was 32, and all his children by Sarah. All were unmarried and, except for the four youngest who were scholars, they were all working.

James Robert was 63 when his father Stephen died in 1885 aged 92. Stephen had been a widower for 44 years after his wife Phoebe died. He died at 24, Henry Street, Woolwich and was buried at Woolwich Cemetery. He had lived for many years at the old home owned by James.

On the 1901 census James Robert was 79 and described as living ‘on own means’, presumably the profits from his property business. There were still four children living with him and Sarah, one of whom was a widowed daughter.

Sarah died in 1910 and in the 1911 census James Robert was still living at 11 Bowling Green Row, Woolwich. With him were his unmarried son Frederick, aged 52, a house decorator and his daughter Ada, 45, who had been widowed in 1897 after just three years marriage.

As Sarah was no longer alive, James had no reason to complete the section referring to the length of the marriage, the number of children born to the marriage and the children still living. However, he did so and made a mistake. He said that nine had been born and all were still alive whereas he and Sarah had 10 children, one of whom had died in infancy.

11 Bowling Green Row had 6 rooms including the kitchen but sculleries and bathrooms were excluded from the count. Given that in 1891 there had been James and his wife Sarah plus six children aged between 16 and 32, all working, plus four younger children, scholars, aged between 8 and 13, there must have been times when the house was quite cramped.

James Robert lived another 12 years before he died on 23 September 1923 aged 101. His death certificate describes him as a Master Dairyman. Both Sarah and James were buried in Greenwich Cemetery.

The probate records show that James Robert’s estate amounted to £3452. Probate was granted to his daughter Louisa Stapley, widow.

Unfortunately the houses in Bowling Green Row, Woolwich, where James and his family spent so many years, have long gone. The area was redeveloped in 1968 with blocks of flats.

It is unknown if all the houses he owned stayed within his large family. The probate value of his estate at 3,452 GBP was quite a substantial amount and equivalent to 210,118 GBP at today’s prices. But, putting that into perspective, if James were alive today he would find that an apartment with two bedrooms, one bathroom and one reception room in 11 Bowling Green Row was listed in 2019 at 275,000 GBP.

James had 17 children from 1846 to 1883, a span of 37 years with 2 wives. So what can we assume from James’s longevity. Was it in his genes? Certainly his father and grandfather lived longer than the average male for those days, but more likely James managed to stay away from the common diseases and killers of those days including tuberculosis and pneumonia.

This is one of the articles which David Emptage had been working on before his untimely death in September 2018. I have added to it with more details of the sinking of the SS Princess Alice.