You are here: Home / Military and Maritime / William Alfred Emptage

William Alfred was born in Ramsgate in 1882. He was the second child of Henry Thomas Emptage, 24, and Martha Elizabeth Emptage, formerly Walk, 26. You can read their story here and that of his brothers Henry Thomas jnr and Frederick John.

His parent’s marriage had broken up and his father had died in 1896 followed by his mother in 1897. Where William was living at the time of or following their deaths is not known but by April 1900 he was a labourer living and working in Dover.

His brother Henry had joined the army in 1897, lying about his age in order to enter two years early. William decided to follow him into army life but waited until he was 18 years, 8 months to do so.

On the 26th April 1900 he enlisted into the Militia in Dover and signed up for a 6 year term with the 3rd Battalion “The Buffs” East Kent Regiment, the same regiment that his brother Henry had joined. William was assigned the regiment number of 5956. 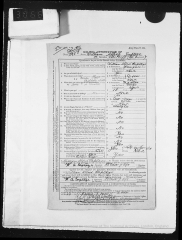 At his medical examination William was described as 5 ft 3½ inches, weighing 106 lbs, with a chest measurement of 31 inches. His complexion was fair, his eyes were grey and his hair was light brown. He had no distinctive marks.

William went through 49 days of Drill Service before he started his “embodied service”. He embarked for South Africa on 6 July 1900.

After returning from South Africa, and having served 2 years and 34 days of a 6 year tenure, William decided to purchase his release from his regiment. It was granted under Paragraph 593 of the military regulations and he was ‘disembodied’ on 17 July 1902.

On 21st September 1902, aged 21, William enlisted into the Royal Horse Artillery, as a driver, signing up at Canterbury and was posted to “A” Depot. His Short Service Attestation papers showed that he signed up for three years with the Colours followed by nine years in the Army Reserve. His new regiment number was 26865.

William’s medical examination described him as 5 ft 5¼ inches, weighing 123 lbs. His chest measurement was now 34 inches and his physical development given as good though he was said to be slightly flat footed but not enough to cause rejection. Evidently, between April 1900 and September 1902, William had continued to grow from a boy into a man. 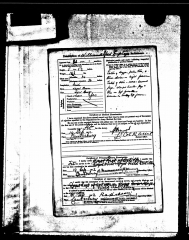 William’s complexion was then said to be fresh, his hair was light brown and his eyes were described as light brown. Either during his time in The Buffs or just before he joined the RHA, William had acquired three tattoos: a dagger, palm tree and three devices on his right fore arm, clasped hands and other symbols on his left fore arm and a woman on the back of his left fore arm.

William joined “U” battery on 14 November 1902. He was evidently based in the Manchester area as he was twice admitted to hospital there to deal with a number of nasty boils. In addition, he sustained a wound at Delamere Camp, spending seven days in hospital. There are no details of how he acquired the wound or what it was.

Delamere Camp was presumably in the Delamere Forest, about 33 miles from Manchester. In the Second World War it became a massive transit camp for soldiers, including many Americans.

In January 1905, William joined “V” battery and, in September, having completed his three years service, he was examined at Aldershot and found fit for 1st Class Army Reserve.

His transfer papers showed that his conduct and character whilst with the Colours had been very good and that he had been awarded a good conduct badge.

William was then 24. He had light brown eyes, light brown hair and a fresh complexion. In his three years service he’d grown another ¼ inch taller and his chest had increased by four inches. His boots were size 8.

It was stated that he desired employment as a labourer and that he was accustomed to the care of horses. His intended place of residence was Manchester. 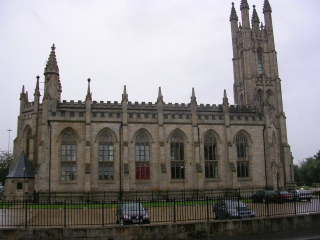 It seems William planned to return to Manchester because he had met a young lady named Florence Beatrice Curtis whilst he had been stationed there.

He found work as a carter and William and Florence married in 1906 at St George’s Parish Church in Hulme, Manchester. William was 24 and Florence was 23.

On his marriage certificate, William referred to his father, Henry Thomas Emptage as being deceased and a furniture remover, which seems to indicate that he spent some time living in London with his father, Malbry Jane Wilson and their children (his half siblings) and so knew his occupation.

Either he had knowledge which his brother didn’t, had a better memory than him or felt that he had no reason to ‘improve’ upon his father’s occupation as, at Henry’s first marriage, Henry had referred to their father as being a farm labourer and at his second and third wedding, as a soldier.

William and Florence set up home in Manchester, where third daughter Ellen Beatrice was born in 1907 but by 1911 the family had moved to Pendleton, Lancashire where William was working as a railway carter.

Still a reservist, William was one of the first to be called up at the outbreak of war and he was mobilised at Woolwich on 5 August 1914. He was posted to the 14th Brigade, Royal Horse Artillery as a driver and was transferred to “U” Battery. His brother Henry Thomas was in “G” Battery.

On the 4th October 1914, William was sent with the British Expeditionary Force to France. Movements of artillerymen at that time are hard to find and what action William saw at this time is not clear. His brother Henry was in the thick of it, at the Battle of Loos, and maybe William was with him at this time, or at least close by. William spent 355 days in France before returning to England on 22 September 1915.

Having served a total of 12 years and 15 days, William obtained an honourable discharge “on the termination of his first period of engagement” in September 1915, with his papers certified at Woolwich. There appears to be no record of William subsequently returning to the army at any time. 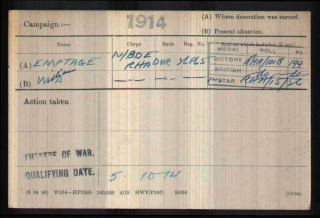 The medal rolls index card denotes that William was awarded the 14 Star, British and Victory Medals.

His brother, Henry Thomas, also a career soldier, remained with the Royal Artillery and was killed on the 30 December 1917 whilst under German bombardment at Heninel.

So, in September 1915, William Alfred Emptage, still only 33, returned to civilian life and to Florence, his wife of nine years.

Some time after 1911 they moved to Altrincham, Cheshire, which is some 10 miles from Manchester. William died in Altrincham on the 22nd July 1935 age 52. Probate records of 15th August 1935 show that William left Florence £225 pounds in his will.

They had been married for twenty nine years. Florence outlived her husband by thirty four years and died in 1969, aged 86, having never remarried.

William and Florence’s daughter, Ellen Beatrice Emptage, married Frederick William Taylor at the Parish Church of Eccles, in Salford, Lancashire on the 6th April 1929. She passed away in October 1997 age 90.

The 3rd Battalion The Buff roll of individuals entitled to the South Africa medals and clasps, dated July 1901 has three names of interest to us: H T [Henry Thomas] Emptage, his brother W A Emptage [William Alfred] and H [Henry William] Emptage.