You are here: Home / Wills Project / The wills and testaments of the Emptiach and Colner families

In the Isle of Thanet in medieval times, there were three late Norman churches, St John, St Laurence and St Peter the Apostle. They served what were to become the three towns of Margate, Ramsgate and Broadstairs, all three being home to the Emptages over the centuries.

In 1563, in the reign of Queen Elizabeth, St Peter’s had 186 households, St John’s had 107 and St Laurence had 98 households. The other parishes in Thanet were Minster with 53 households, Birchington with 40, St Nicholas with 33 and Monkton with 15 households. So clearly St Peter’s had the largest number of parishioners. 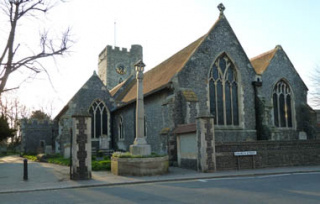 The earliest Emptages for which, so far, we have records, were yeoman farmers in the parish of St Peter.

Situated on the highest point of the Isle and with good land for arable crops, St Peter’s was a thriving farming community.

There was a nearby fishing village, Bradstow (an Anglo-Saxon word meaning a broad place). Bradstow developed into a small town and resort and became Broadstairs. The full name of the town is now Broadstairs and St Peter’s.

There was no standardised spelling and attempts were often made to Latinise names so the name was often spelt as a variation of Emptiach. Even in wills there was no consistency as variations of the spelling often appeared in the same document whilst clearly referring to the same person.

The parish registers or Bishop’s Transcripts for St Peter’s began in 1565 and so the wills and testaments of our ancestors are currently the earliest documents we have. To date, the first mention we have of an Emptiach is in the will of Edmond Colner, which was proven in 1489. 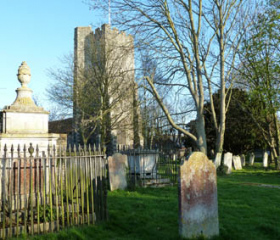 No doubt many of our ancestors were buried in the large graveyard of St Peter’s but unfortunately the earliest gravestone which is still legible and not worn away by the weather is dated 1623.

History does not record whether any of the Emptages were ever punished for a misdemeanour by being placed in the village stocks (which are still in place today on the village green).

The community of St Peter’s and the surrounding area was close with some notable families, including the Colner family, later to be known as the Culmer family.

Analysis of the wills and testaments of the Emptiach and the Colner families shows that the members of one family frequently appeared in the wills of the other, either as a beneficiary, as feoffees or as witnesses. Members of other local farming families and notables of the same parish were also represented in both families as feoffees and/or witnesses, again with variations in the spelling of the surnames.

Today we refer to the will and testament as one document but in the early days, whilst written at the same time, they were separately identified and generally dictated to the local vicar, who acted as scribe and was often one of the witnesses.

The testament came first, often written in Latin, and dealt with the testator’s bequests of moveable household goods and money plus the naming of executors.

However, the will was generally written in English. It dealt with the testator’s lands and property and could be quite complicated, often including the appointment of feofees (trustees) to manage the lands for the testator’s widow or until the heirs came of age. Sometimes feoffees had been appointed earlier and thus were used to make it look as though the testator’s estate was smaller than it actually was. Today we’d call it a tax avoidance scheme but by 1660 the loss to the country’s finances was such that the practice was prohibited.

When studying the old wills and testaments, we are not only faced with olde English writing and spelling but with the problem of documents written in Latin. Indeed, there are times when the writing has been such that I’ve been uncertain as to whether I was trying to read English or Latin.

Many of the wills and testaments are held by the Kent History and Library Centre, Maidstone, Kent and thankfully the staff are able to provide both a translation service from Latin to English and transcripts of the oldest and most difficult writing, for which we are most grateful.

6 shillings and 8 pence was one third of a pound and, according to the National Archives, would be worth approximately £221 in 2017. However, in 1510 it was enough to pay the wages of a skilled tradesman for 11 days.