Avis’ beginnings were somewhat complicated. Her mother was Martha Emptage (formerly Walk) the estranged wife of Henry Thomas Emptage. He was the son of Alfred Burnett Emptage and Ann Phoebe Hopkins.

Martha and Henry Thomas married in 1880 and lived in Ramsgate where Henry was a general labourer.  They had five children: Henry Thomas jnr, William Alfred, Frederick John and twins Charles and Robert who both died in infancy in 1886.

By September 1887, the family was living in Canterbury, where Alfred James was born.  They moved to Bridge, where Ellen Lucy was born in October 1889.  Just three weeks later, Alfred James died.

However, by then, Henry Thomas had entered into a relationship with Malbry Jane Wilson and they had had a son named Alfred George in July 1889.

Ellen Lucy was baptised in Bridge in January 1890. Sometime between then and April 1891, the marriage broke down completely and Martha moved back to Thanet.

At that time, there was no divorce for ordinary people and people simply moved and set up home with a new partner as a supposedly married couple.

At the time of the census, 5 April 1891, Martha was noted as a visitor in Broadstairs, married, with two of her children, Frederick aged 7 and Ellen Lucy aged 1.  Also staying there was her brother in-law, William John Emptage, noted as single.

Henry Thomas had remained in the Bridge area with his two older sons.  He was listed on the census as a widower though we don’t know whether he described himself as that or it was an assumption by the owner of the house where they lodged, who presumably provided the census information.

Avis was born on 16th October 1891 in Thanet. Her birth was registered as the daughter of Martha Emptage and William John Emptage, a labourer.

Evidently Martha was pregnant with Avis at the time of the census.  We don’t know when Martha and Henry Thomas split up but we think it happened before Martha moved back to Thanet and began a relationship with William, thus, despite initial doubts, we believe William was Avis’ father.

Avis was baptised 5 November 1893, at St Peter the Apostle Church in Broadstairs, on the same day as her sister Emily who had been born in April 1893.  The parents were noted as William John and Martha Emptage.  Emily died on 15 April 1894.

Henry Thomas had gone on to a full relationship with Malbry Jane Wilson who, though no marriage record between the two of them was found, in all subsequent documentation described herself as the widow of Henry Thomas. He died of pleurisy following in a work accident in Hammersmith in 1896 when he was just 38.  He left four young children with Malbry, in a state of dire poverty:Edward Lindsey, Charles Frederick, Helen and Walter Dansy.

Martha Emptage died the following year, having had seven children with Henry Thomas and two with William John.  She was 41.

Left with small children to look after, in the same year, William John married Blanche Jupp.  In 1901 they were together in Broadstairs with what, in today’s terms, could be called an extended family: their daughter Emily, then three, and William’s daughter Avis Mary (9), by Martha, plus Ellen Lucy (11), Martha’s daughter by Henry Thomas.  Frederick was working as a butcher’s assistant, living with his employer and his family in Broadstairs.

William and Blanche went on to have two more children, Ethel and William, in 1903 and 1906.  But William snr died in 1907 aged 43, having been married to Blanche for nine years. Blanche remarried in 1912.

Having lived with William John and Blanche and her half siblings, we hope that Avis had some security and happiness with them and hope that she remained with them after her father died.  But we know that she wasn’t with them in 1911, when she would have been aged 20. In fact, we can’t find her on the 1911 census anywhere.

Avis reappears at her marriage to Harold Harding in May 1913  at St George Hanover Square, London. Having served in the Grenadier Guards for three years, Harold had been discharged in 1911 and had begun training as a teacher.

So Harold was an army reservist and when war broke out, he was immediately called up, as a member of the British Expeditionary Force. He left for France in August 1914. Avis was never to see Harold again as he died the following month. They had been married just 17 months when Harold was killed, aged 26.

In September 1923, Avis Mary Harding, aged 31, widow, married Horace Frederick Kay, bachelor, aged 35, in Lambeth, Surrey.  There do not seem to have been any children of the marriage.  Horace is thought to have been the son of Edward and Jane Kay.

At the time of the Register in September 1939, Avis and Horace, an insurance clerk, were living at 48 Rosedale Road, Cuddlington, Epsom.  Sadly Avis died as a result of an accident at home on 5 July 1942 aged 50. The cause of death was given as 1(a) Shock due to (b) a fall onto the larynx when in an epileptic fit, 2. Epilepsy. Horace died in 1972.

We think that the loss of Harold so early in their marriage was the latest event in a difficult life for Avis and we hope that her 18 years marriage to Horace gave her some security and happiness but we’re so sorry that her time with him was cut short by such an accident.

In September 1914, Harold Harding of the Grenadier Guards Regiment of the British Army on active service in France during the opening stages of the First World War, died of his wounds at the French Military Hospital in Saint Maurice (now the Hôpital National, rue du Val d’Osne), just a a few weeks after the start of hostilities, and was buried in Saint Maurice.

At the beginning of August 1914, Europe was on the brink of war. Both France and Germany mobilized, and on August 3rd, the German Empire declared war on France. The next day, Britain entered the conflict on the side of the French following the invasion of Belgium by the Kaiser’s troops. 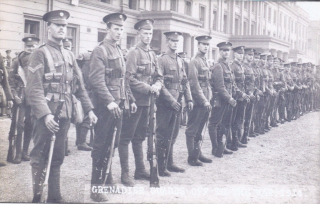 Over the next two weeks, the 100,000 men of the British Expeditionary Force disembarked at Le Havre, Rouen and Boulogne before deploying a few days later along the Belgian frontier in a bid to counter the advance of the German Army. Guardsman Harding left for France with his regiment on August 12th 1914.

For the BEF, there followed several violent clashes with the Germans at Mons, Landrecies and Le Cateau at the end of August, and then the long retreat towards the Marne under a scorching hot sun.

On September 1st 1914, at a place called Le Rond de la Reine in the Forest of Villers-Cotterêts some 80 kilometres (50 miles) north of Paris, the 2nd Battalion of the Grenadier Guards – in which Guardsman Harding was serving – fought a bitter rearguard action against the Prussian infantry of General von Kluck. There were heavy losses on both sides and it was probably during this fierce fighting north of Villers-Cotterêts that Harding was seriously wounded. Nearly 300 officers and soldiers of his regiment were killed in action and there were a large number of wounded which the British were forced to abandon as prisoners-of-war in their continuing retreat before the onslaught of the German Army as it advanced inexorably towards Paris.

The Germans entered Villers-Cotterêts and set up a field hospital there where the wounded of both sides were treated. It seems likely that Harding was among them, but following the withdrawal of the German Army in the middle of September after its defeat on the Marne, Villers-Cotterêts was retaken by the French and the wounded found there were evacuated to hospitals behind the front. In all probability, it was then that Harding was transported to the Military Hospital in Saint Maurice on the south-eastern side of Paris. 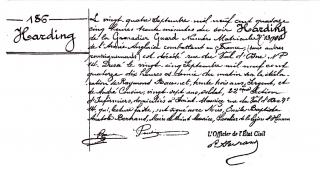 Harold failed to recover from his wounds and died during the early evening of September 24th 1914. His death certificate was issued at the Mairie (Town Hall) of Saint Maurice the following day, but it was only four days after he died that the British military authorities were informed.

At first, Harold Harding was buried in a temporary military cemetery in the hospital’s grounds which is thought to have been located just opposite the church, but as with the remains of some thirty French soldiers who had also died of their wounds at Saint Maurice Hospital between 1914 and 1924, his body was exhumed and reinterred in the town cemetery in April 1925.

What do we know today about Saint Maurice’s Tommy? According to information provided by the archivist of the Grenadier Guards Regiment in London, Harold Harding was born in 1890 in Wilton, Wiltshire, in the south of England. He was very tall, measuring 1m 93 (6ft 4 inches), and at the age of 18 he enlisted for 3 years in the Grenadier Guards (the then required minimum height to join the regiment was 6ft 2 inches). In May 1910, he was on parade with the Grenadiers at the funeral of Edward VII in London, and a year later, in June 1911, he was again present with his regiment at the coronation of George V.

Having completed his three years with the Grenadiers, Harding was discharged in September 1911 and then studied to become a school teacher. On May 10th 1913, he married Avis Emptage but the couple never had time to start a family. When war broke out, Harding was called up as a reservist and a week later left for France with his regiment. As for nearly a million other servicemen of the British Empire and almost a million and a half French soldiers, he would never return. 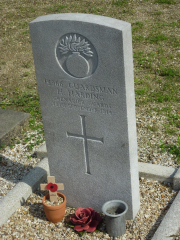 Today, his grave can be found in Section 3 of Saint Maurice Cemetery. The headstone shows the emblem of the Grenadier Guards – a flaming bomb – and indicates his name and initial, his serial number, rank, regiment and date of death, engraved initially as 28th September 1914. As we have seen, this date was erroneous since his death certificate indicates September 24th. The mistake possibly stems from the fact that as the British military authorities only learnt of Harding’s death on 28th September, they may have assumed that this was the date he died.

The Commonwealth War Graves Commission, the organization responsible for all the graves of British servicemen and women throughout the world, was informed of the error early in 2016 and in the light of the date indicated in Harding’s death certificate, arranged to have it corrected to September 24th.

On a monument erected in the Forest of Villers-Cotterêts to the memory of a young English soldier of the Grenadier Guards and to that of his comrades who fell there on 1st September 1914 are engraved the words « Passant, Arrête-Toi » (“ Passer-by, Pause Awhile”). The message is still as pertinent today, more than a hundred years later. Let us spare a thought, then, for Harold Harding and his French brothers-in-arms, Giraud, Moulin, Peltier and the others, who were also cut down by the war in the prime of life and whose graves are to be found not far from his. They deserve our gratitude.

Robert Bullock lives in Saint Maurice and wrote an article for Saint-Maurice Info about the British ‘Tommy’ buried in the town. He contacted me for information about Avis Emptage and kindly gave permission for me to reproduce his article on the website.

I already knew about Avis as she was part of the very complicated story of Henry Thomas Emptage (my great grandfather) his wife Martha Walk and his brother William John. A story which had taken considerable effort to unravel with umpteen emails back and forth between myself and David Emptage in Melbourne, Henry Thomas’ grandson.